November 25, 2016 by ConcertKatie No Comments 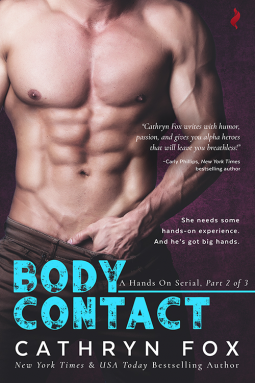 Body Contact is the 2nd of a 3 part series. I had not read the first part before reading the 2nd. It didn’t seem like I was missing out on anything. In this book Jack is with Danielle and teaching her a thing or two about sex. They are going to be together for 2 weeks and that is it – but it seems like that might not be what happens in the end.

This is a short story – only about 60 pages so it was a pretty quick read.

Asking pro football player Jack Rider to teach me everything he knows about sex might have seemed like a good idea at the time, but now I’m not so sure I can handle a guy like him. I thought he’d just straight up do me, ridding me of my pesky virginity sooner rather than later. But no, he had his own ideas about bringing me up to speed on sex. His two weeks of slow seduction might just be the death of me, but since he’s the one in charge, I have to play the game his way. Not that I’m not enjoying it. I am. Who wouldn’t, right? I guess I just can’t help but wonder how I’ll ever let another man touch me after him.

This is the second of a three-part series full of mind-blowing sex, featuring a dirty-mouthed football player who knows the score and an inexperienced therapist who needs to learn it. BODY CONTACT is sure to leave readers begging for more. The next installment comes September 2016.