January 17, 2023 by ConcertKatie No Comments 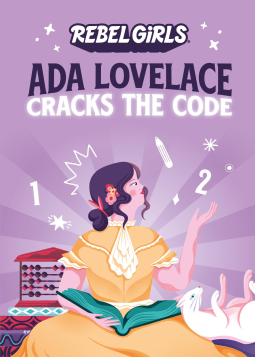 I love to read about Ada Lovelace, who was one of the first computer programmers (yet it’s been predominately a male dominated career since! hmph!) so I was pretty excited to stumble upon Ada Lovelace Cracks the Code from Rebel Girls.  The Rebel Girls book series is probably exactly what I needed growing up – a series of books about extraordinary women in history – all written and illustrated by females.  In this book, Ada realizes that her father was special and figures that if he was extraordinary, well then she must be too!  She seems to be a rambunctious and curious young girl.  She gets a new governess, Miss Stamp, who seems to be up to the challenge of teaching young Ada.   As she grows older, she knows she will have to marry but is concerned about finding a husband that will understand her.  She ends up working with Charles Babbage (another well known name in the programming world) and insisted her name be left absent on the work they did together because men would never take a scientific article seriously if a woman’s name was on the cover (how little has changed!)

I liked how at the end of this book it broke down simply how a computer program works and had little exercises for the reader to try out as a basic intro to programming! There’s even some binary code included.

From the world of Good Night Stories for Rebel Girls comes a story based on the exciting real-life adventures of Ada Lovelace, one of the world’s first computer programmers.

Growing up in nineteenth century London, England, Ada is curious about absolutely everything. She is obsessed with machines and with creatures that fly. She even designs her own flying laboratory!

According to her mother, Ada is a bit too wild, so she encourages Ada to study math. At first Ada thinks: Bleh! Who can get excited about a subject without pictures? But she soon falls in love with it. One day she encounters a mysterious machine, and from that moment forward Ada imagines a future full of possibility—one that will eventually inspire the digital age nearly two hundred years later.

Ada Lovelace Cracks the Code is the story of a pioneer in the computer sciences, and a testament to women’s invaluable contributions to STEM throughout history.

Meet extraordinary real-life heroines in the Good Night Stories for Rebel Girls chapter book series! Introducing stories based on the lives and times of extraordinary women in global history, each stunningly designed chapter book features beautiful illustrations from a female artist as well as bonus activities in the backmatter to encourage kids to explore the various fields in which each of these women thrived. The perfect gift to inspire any young reader!