January 16, 2023 by ConcertKatie No Comments 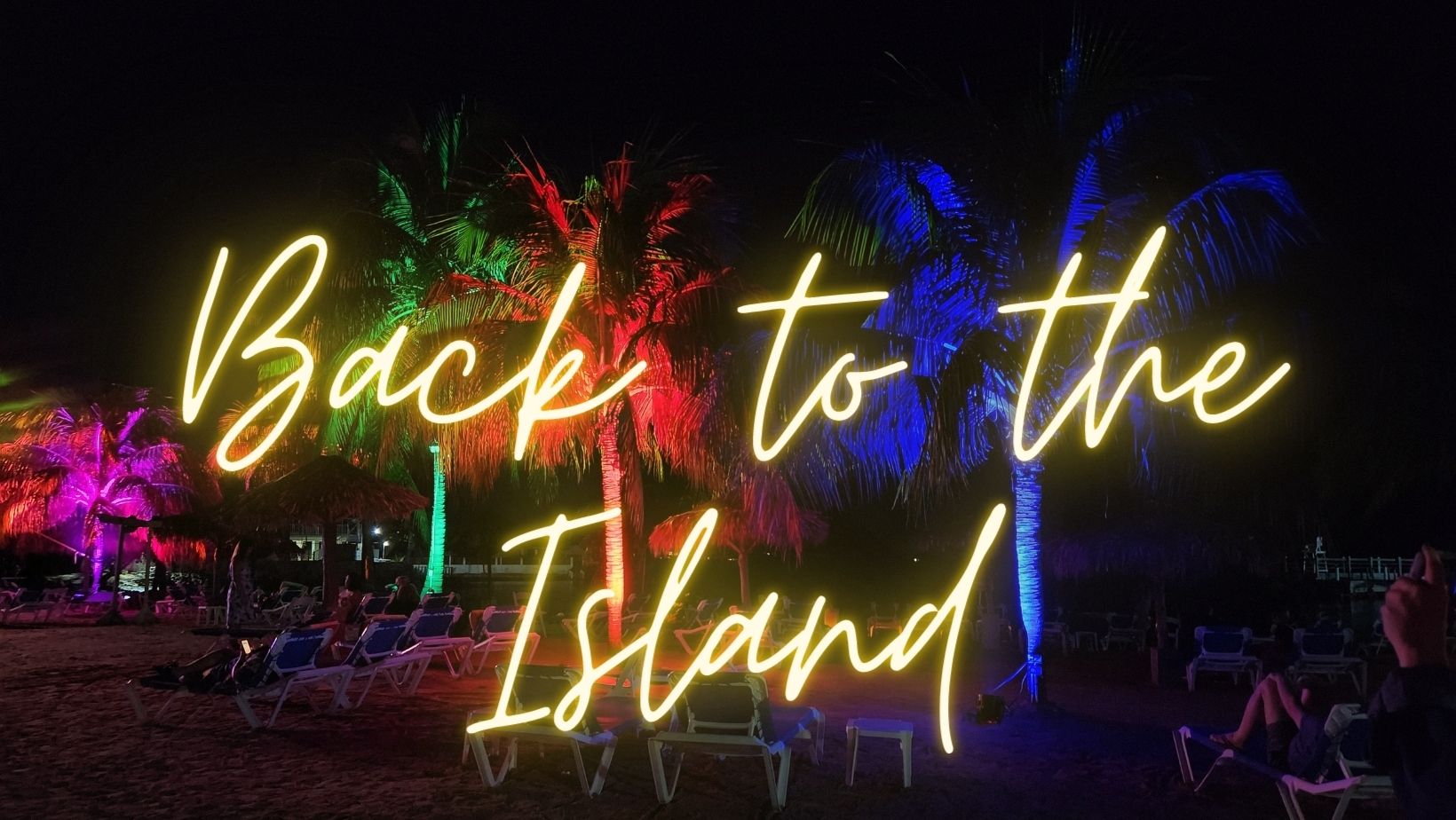 Earlier this month I made my way back to Jamaica for Back to the Island Year 10.  We ended up going 2 days early this year – although by the time I arrived at the resort it was basically time for dinner after all the travel.  The second day, most of my friends ended up doing an off resort excursion so another friend and I spent the day at the pool.  That night we tried to see a meteor shower but either didn’t stick it out long enough or were too far south and didn’t end up seeing anything. 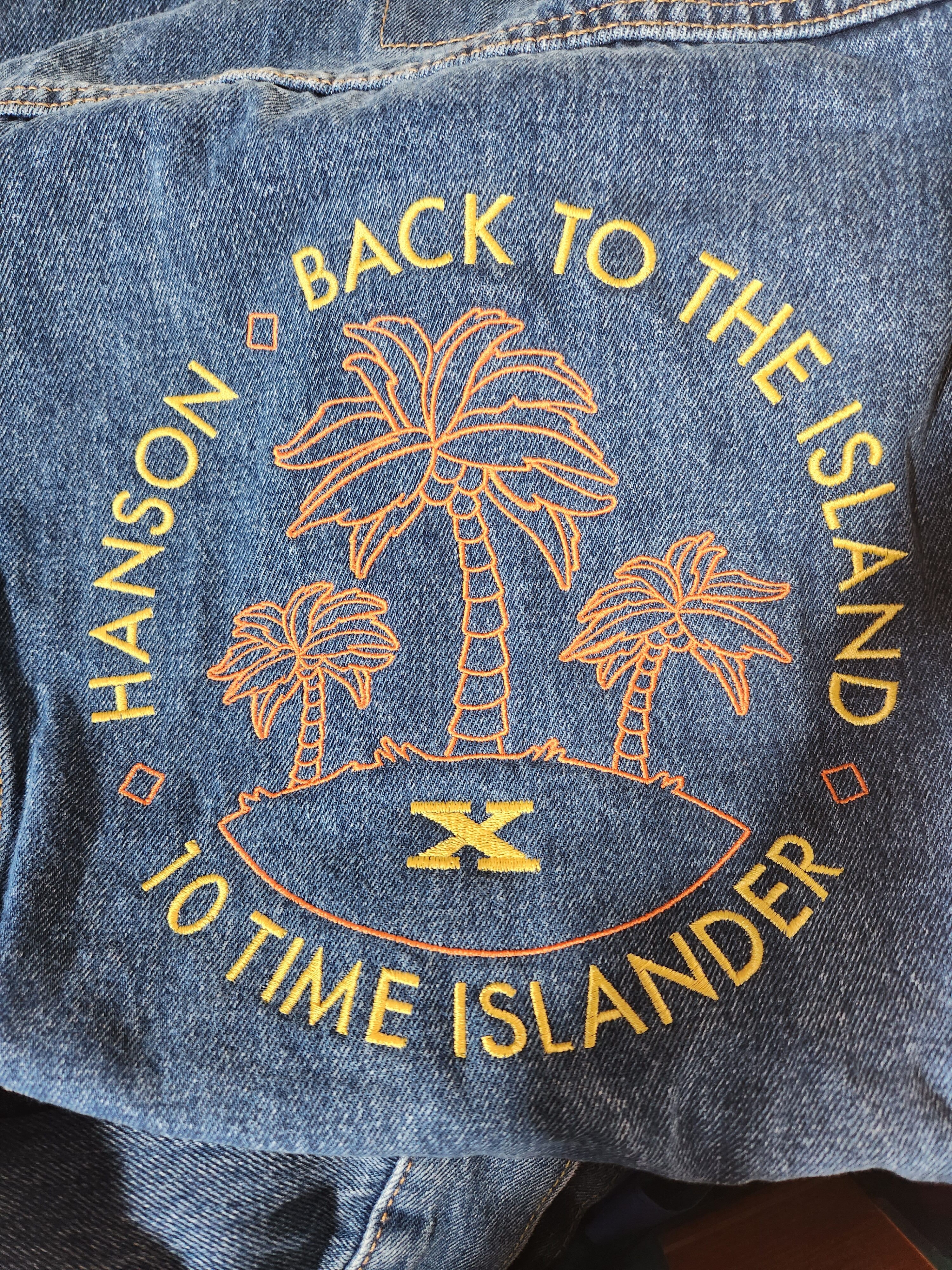 When the event officially kicked off, we lined up to check in with Island Gigs to get our color assignment for the event – hoping for Red or Yellow – we got Orange. Which had apparently replaced Yellow. We also got our yearly gifts – the 10 year was an embroidered jean jacket. 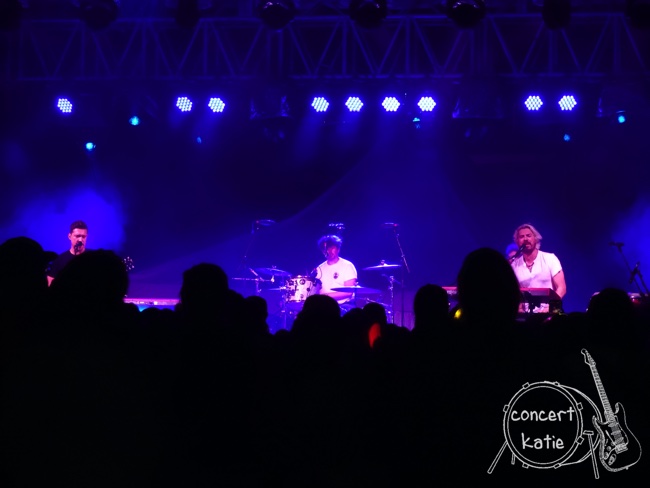 During dinner, the guys did soundcheck.  A few hours later it was show time! Once again the guys said they were going to try and not repeat any songs.  It was a pretty solid setlist starting with a reggae version of Best of Times, going into a Bob Marley medley (that they had done last year as well) and then threw a song I had never heard before in there too – I’m a Man of Constant Sorrow I guess from O Brother Where Art Thou?  My lack of movie watching worked against me. Before the event I had sent Zac a list of songs from albums they play the least – and Me Myself and I was one of them and it ended up in this set so I started wondering if maybe he had seen the message and just not responded to me about it?  Also of note – there was a shooting star in the sky during GO! This excited us since we didn’t see any when we were looking the other night… and then they sang River and brought all our excitement right back down.

After the show was games with Isaac and Zac for Red and Orange teams.  We had selected our team but had no idea what we’d actually be playing.  Turns out it was once again Family Feud and the set up had 0 planning whatsoever.  Our team didn’t end up picked and it was probably for the best because we wouldn’t have made it up to the stage and I probably wouldn’t have been able to even get on it either.  I’m debating buying the game to memorize and cheat for next year because the answers to some of them were… out there.

The next morning was photos with the band. My friend ended up braiding my hair for me.  I didn’t have anything planned to say to them which in retrospect was a bad idea – but there was a lot of clusterfuck planning for there being a 10 year photo with the band that got me too worked up to think about anything to say.  But when I told them I was a 10 year Taylor said… “I’m not saying I’m better than you… but I’m better than you..”  he knows… haha. They also all gave me big hugs and said they hoped I was enjoying myself.  We hung around for the 10 year photo in our jean jackets and then hung out until it was time for Zac’s solo show. 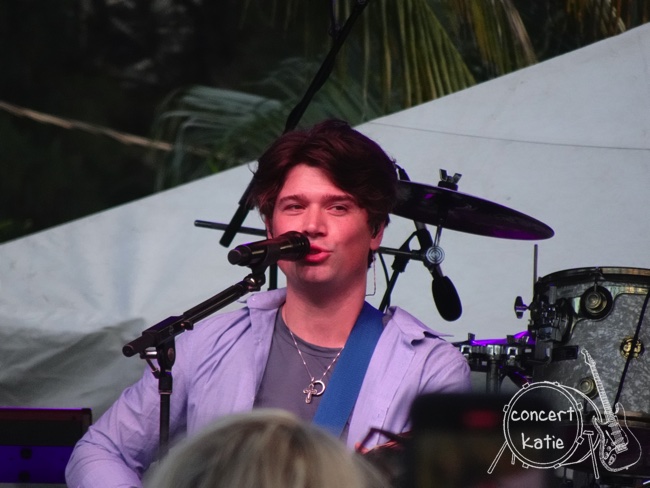 Zac’s set was probably my least favorite. He didn’t seem to prepare and his voice was rough and while he usually gives us something new, he didn’t this time. He did do some members only songs but several of them seem to be staples for his solo sets. Someone has to rank #3 out of 3 and this year that honor went to him.

Later that evening was time for show #2 which was by FAR the best setlist of the whole event.  I was up and out of my seat singing along for nearly half the set (which I kind of regretted the next morning!)  They started with one of my favorites from Against the World – Don’t Ever Change – and then ended up doing 3 more songs that were from my list to Zac – Cut Right Through Me, Running Man (a song never before done at a BTTI event!) and Lucy.  Now we were up to 4 so I really started questioning if he had seen my message or not. 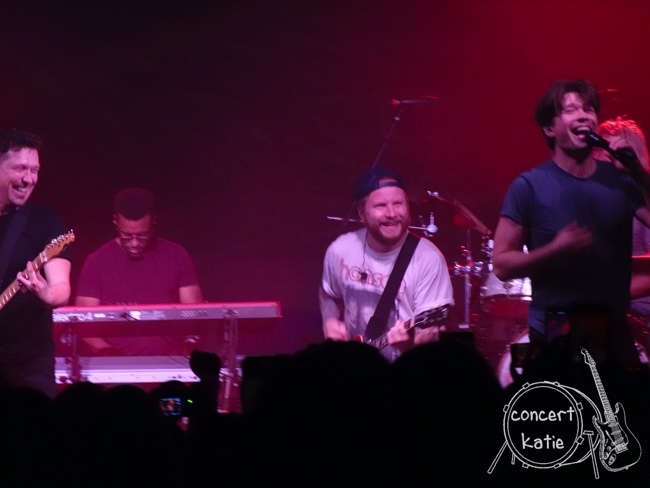 They also pulled out a bunch of rarer songs and even had Zach Myers join them for guitar on I Believe in a Thing Called Love and Don’t Let Me Down.

After it was games for Green and Blue and we tried to get ourselves in a good position for watching and ended up right in the front once things were set up.  At least until 2 people decided to climb in front of us and sit on our feet.  They had absolutely no spacial awareness and seemed to be mad we were there, when they sat on us? The dude kept moving closer and closer to me too, which made me joke that I had just given birth to him.  His friend ended up getting up and putting a bracelet on Zac and wanting to try and get on teams she wasn’t signed up for.  Zac handled himself very well and then at one point ended up kicking sand our way and if it was accidentally on purpose at those people and we just got the excess, I’ll take it.  It was just the weirdest thing.  AMMM also joined a round of Family Feud which was a ton of fun as well and perhaps in future years if we’re still doing Family Feud Taylor should host and have Isaac and Zac on separate teams with fans (or some other combination thereof). 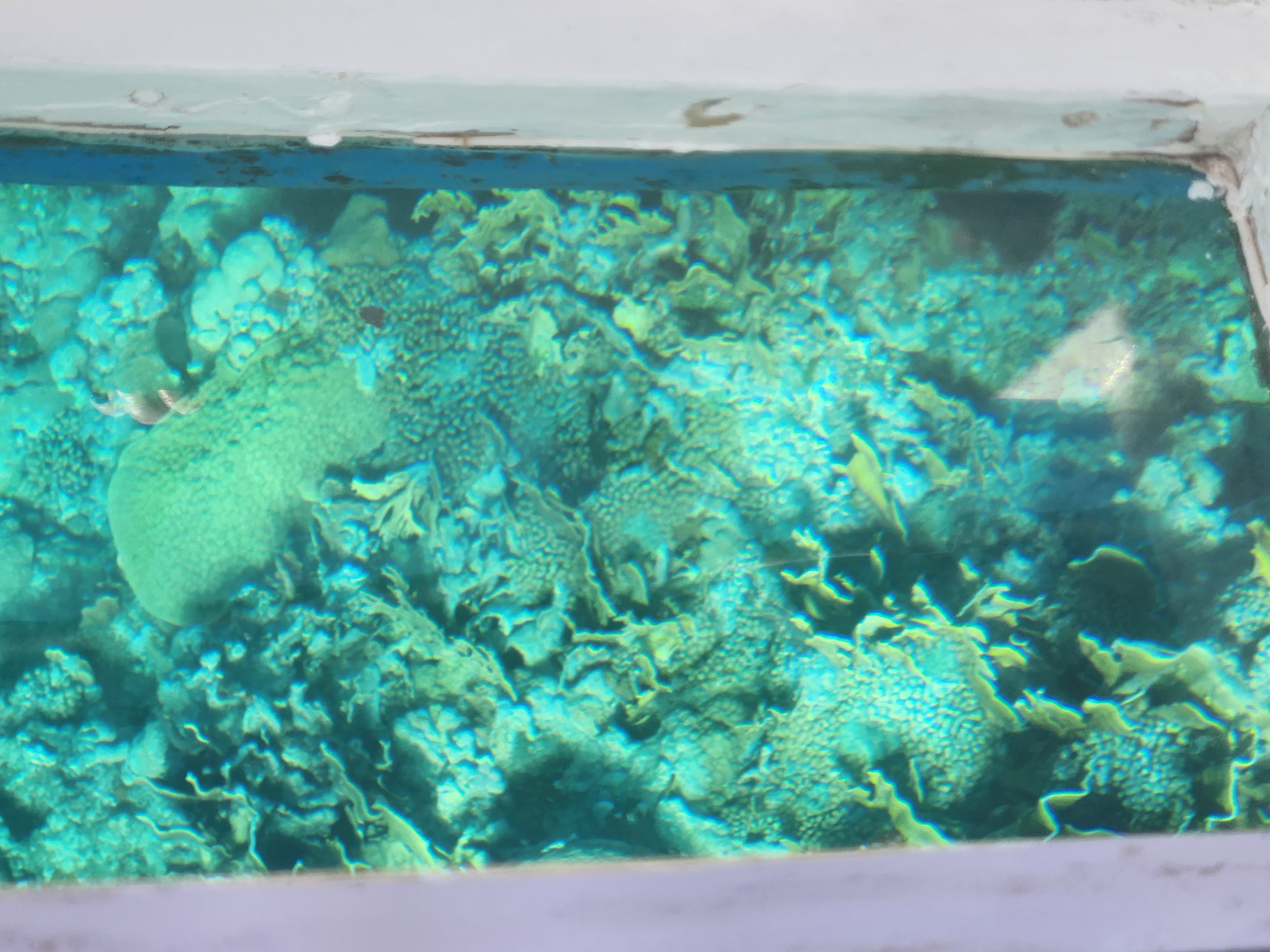 The next morning we went out on the glass bottom boat that the resort offers. It was about half an hour and we saw some starfish, fish, sea cucumber, a sunken boat and a couple of sunken planes.  We also stopped at one point and fed some fish so they’d come closer to the side of the boat.  It was pretty fun but getting on/off the boat was stressful, but I did it!  Just about as soon as we got off the boat it started raining, so we decided to duck into the resort lobby for a bit and then it absolutely started to POUR.  Perfect timing. 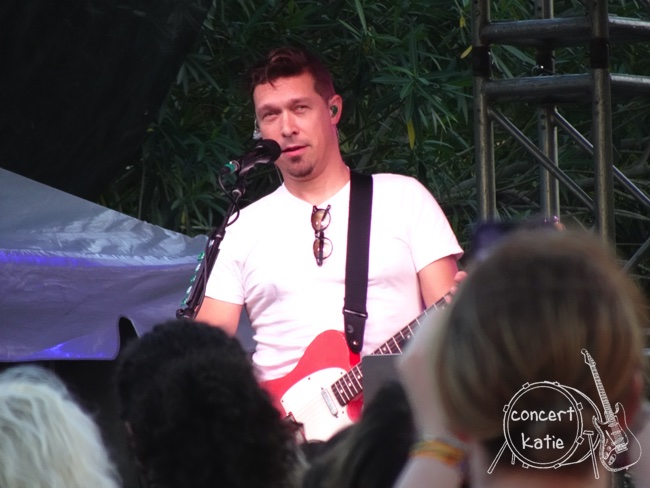 Isaac had the solo show and was about 20 minutes late.  He started off strong and I think if he flipped his setlist a bit and started with the same ‘ol same ‘ol and ended with the rares it would have won him some more points – but he did Make It Through The Day which otherwise was only performed in 2009 at a members only event and during his quaranstreams which definitely got him some points.  But Hand in Hand, Deeper and For Your Love?  Meh.  (Granted he does have a lot less of a pool of songs to choose from and he did make some tracks for some of his other songs which took some time and effort) 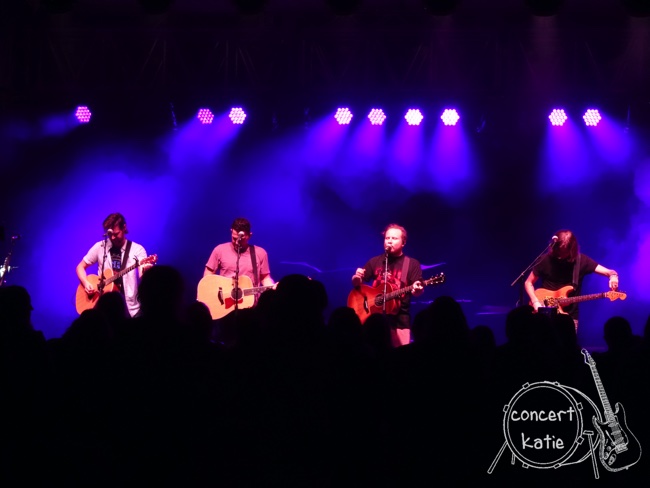 That night was the AMMM set – they were a lot of fun and had Taylor and Zac join them for TLC’s “Waterfalls” and Isaac joined them for Tom Petty’s “You Wreck Me”.  The beach bonfire had some Jamaican patties which made us pretty happy.  Later that evening, Taylor did his pool party DJ party.  We hung out in the lobby and had some patties, watched the bats dance to NKOTB and had some New Zealand candy that a friend had so kindly sent for me. 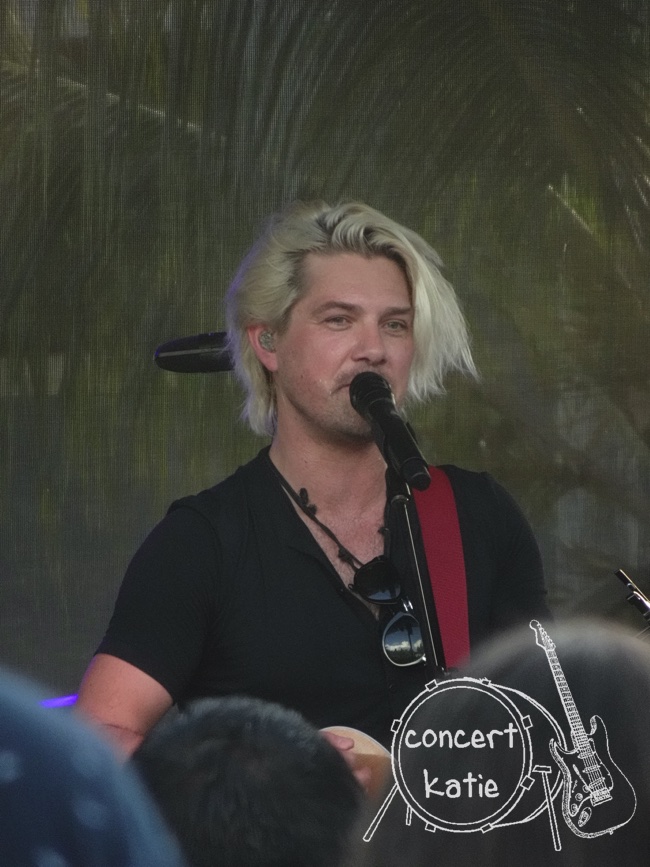 Our final day of shows brought us to Taylor’s solo show in the early evening.  He won the solo set, but just barely over Isaac.  We were hoping he would do “All I Know” (and it seemed like he was thinking about it based on friends who asked him during photos) but he had said that he got a lot of requests and was going to have to let some people down and he’s not like Isaac so he won’t play any songs he hasn’t practiced!  We did end up getting “Climb” which had not been done before.  I could have done without Save Me and Sound Like Joy, though.

Before the last show, we were supposed to have a beach banquet but it was raining. Things got pushed back a bit and moved into the buffet area instead.  It was PURE CHAOS. I always enjoy the steel drum band, but shoving everyone in one spot to eat all at once before the final show is always the most stressful. 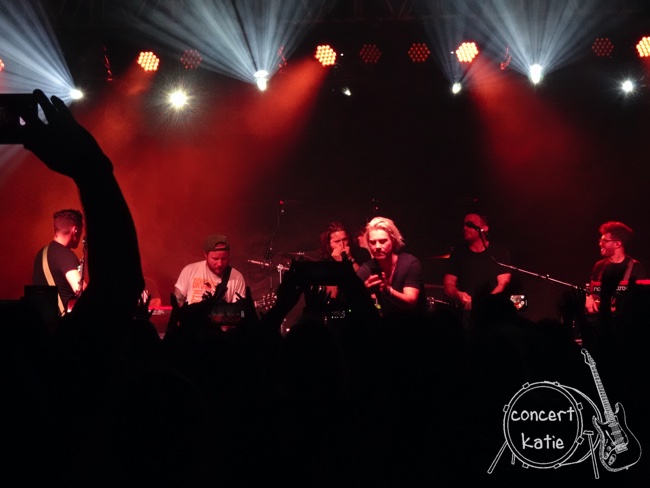 The final show of the night was the one most reminiscent of the RGB Tour – which looking back probably would have been a better show for Night 1 – but they did throw in some mixups – including song #5 that I had asked Zac about – Dying To Be Alive.  As well as a brand new cover – Don’t Worry, Be Happy! The lighting changed to the typical reggae red, green, yellow and was really cool.  To finish out the set their encore was members only song “Dressed in Brown Eyes” with AMMM’s Zack Mack on harmonica and Back to the Island with AMMM joining in.

After the show, AMMM set up on the beach and did a couple of hours of songs without a set list – including one of my favorite Ingram Hill songs – Almost Perfect.  Isaac and Zac were around mingling and we got to talk to Isaac early and put in some requests for next years guests as well as confirm that it did seem to go by fast and was probably one of the best BTTI events.  We ended up finding Zac as well so I could ask him if he did get my message or not – since they played the songs – and he said he didn’t think he had seen it but if they played them I must have asked him for them by using the force and that they had tried to throw some rarer tracks into the setlist.  I confirmed that Running Man had never been played before and they also hit some of the lesser played tracks off of the albums. (If he didn’t see my message, I guess my reporter interview gave them a complex instead!)

Even with the dance party being the night before, it was a nice way to end one of the best BTTIs ever! (It’s too bad all the drama for me trying to get home – totally ruined such a great vibe I was planning on riding back home!)

I am looking forward to booking for year 11, soon!