Book Review: Bring It On

December 6, 2022 by ConcertKatie No Comments 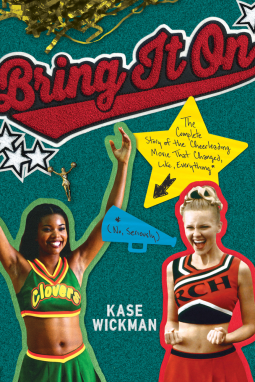 Bring It On was a pretty popular movie when I was in high school so it’s no surprise that it is no over 20 years old, even though I refuse to believe I am that old.  Bring It On by Kase Wickman is “The Complete Story of the Cheerleading Movie that Changed, Like, Everything.”

The movie started as “Cheer Fever” all the way back in 1996. The book features on the whole process of the film being written, made, auditions, what music was included and a lot of interviews with many involved with the movie. I didn’t really think much about the legacy of this movie before, but the book really put it all into perspective and I am definitely going to have to watch it again soon to reminisce!

Featuring dozens of interviews with the cast and crew, fans of the franchise, film scholars, former and current cheerleaders, fellow filmmakers, and more.

Gabrielle Union, Kirsten Dunst, and Eliza Dushku have all risen to fame since their performances in the original cheer classic, but boldface names like Solange Knowles, Rihanna, Hayden Panetierre, Ashley Tisdale, and more also appeared in Bring It On films. The first-time director who helmed the movie, Peyton Reed, now has multiple Marvel smash hit films under his belt.

Not bad for a movie that almost didn’t get greenlit in the first place—but went on to win the box office its opening weekend, gross more than $90.45 million worldwide, and spawn a half-dozen sequels, a Tony-nominated musical, and a whole new genre of female-led films.

With the support of the filmmakers and producers, author and pop culture expert Kase Wickman accessed Universal’s archives and conducted new interviews with cast, crew, and more for a full reveal of all the stories fans will love in this complete history and examination of the legacy of the greatest cheerleading movie almost never made.

Beyond its 20th anniversary, the legacy of Bring It On endures. It’s time we all understood how it changed, like, everything.