November 1, 2022 by ConcertKatie No Comments 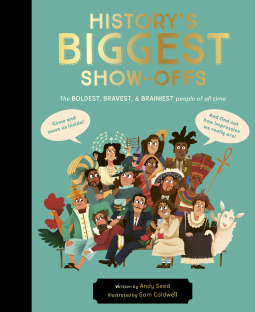 History’s Biggest Show-Offs is a children’s book featuring the Boldest, Bravest and Brainiest people of all time. The book is broken down into People in Charge, People who Think Up Stuff and People Who Create Things. The book is trying to inspire young ones to be their own kind of show-off. The book contains some great stories as well as some games throughout to make learning a bit more fun! Of course my personal favorite is probably Ada Lovelace – one of the People Who Think Stuff Up and that’s probably the kind of show-off I am, as a woman engineer also in science and math following in Ada’s footsteps! You’ll learn a lot about various royalty, inventors and artists in this book and even get to see what the top 5 is from each category, all with a lot of fun quizzes and illustrations along the way.

Some people just can’t resist showing off… and this BIG book introduces readers to some of the biggest braggers and loudest show-offs throughout history.

This book takes young readers on a tour of some of history’s greatest show-offs, from wealthy kings and queens who loved to splash the cash to masterful musicians who weren’t shy about their talents, or brilliant artists who could not stop telling others how great they were.

Some of the showoffs in this book include:

Featuring long-dead leaders, artists, musicians, and more, from all around the world, the snappy facts are paired with humorous character illustrations from the brilliant Sam Caldwell for maximum hilarity.