October 15, 2022 by ConcertKatie No Comments 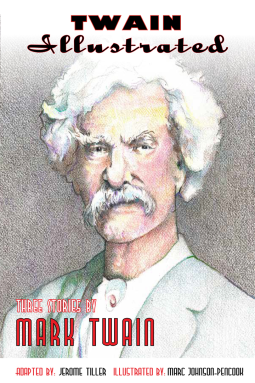 Twain Illustrated contains three stories from Mark Twain, will illustrations added.  The first is Emerson, Holmes, and Longfellow – which is also known as Twain’s December 17, 1877 Speech at the Hotel Brunswick in Boston. The second is The Facts Concerning The Recent Carnival of Crime in Connecticut and finally the third, Running for Governor.  None of these had been something I had read before, so getting to read them as well as have the illustrations worked in to break the text up was a nice treat.

I received a free e-copy of this book from Net Galley in order to write this review, I was not otherwise compensated.

Twain Illustrated: Three Stories by Mark Twain, is a collection of three classic Mark Twain stories, illustrated by Marc Johnson-Pencook. All three stories, Emerson, Holmes, and Longfellow, The Facts Concerning the Recent Carnival of Crime in Connecticut, and Running for Governor, show why Mark Twain is recognized as a master of wild, American humor. But unbelievably, when Twain teams with contemporary-classic illustrator Marc Johnson-Pencook, his humor grows even wilder yet. For Marc displays his own brand of mastery depicting the outrageous scenes that shape each Twain story. Forty-three of his pen & ink illustrations are interspersed throughout this collection of stories, which is respectfully adapted and illustrated to capture and hold the attention of modern-day, middle-school readers. But these stories are not just for them! Modern-day adults love illustrated literature, too, especially when Mark Twain tells the stories that generate such wildly-imagined images. All readers will be pleased to discover that Mark the author and Marc the illustrator work perfectly well together, almost as if they share the same mind across the decades.