October 23, 2022 by ConcertKatie No Comments 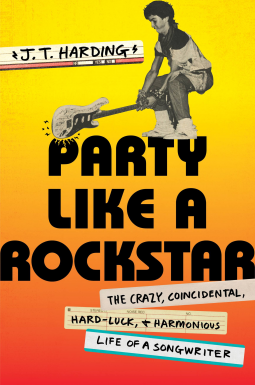 Even after seeing the title “Party Like a Rockstar” it didn’t occur to me that this book was from the author of the song of the same title that our local radio station was absolutely OBSESSED with back when it came out.  Not until he started mentioning the lyrics he wrote out and I was singing along, did I make the connection.  I wasn’t surprised when Connecticut was on the short list of states that was playing the song. I feel like they played it every hour back in 2008 or 2009!

This book is by J.T Harding, who I actually know as “JTX” or “The JT Experience”.  His story was a very interesting one, he was adopted at birth and had dreams of being a rockstar.  He talks about touring with other bands, getting his chance on stage, making it big with his song and writing songs for other acts.  I was kind of surprised how many country hits he had written because those songs all seem like they’d be a lot different than the song of his I was familiar with.  He even talks about a song he wrote for the Jonas Brothers!

This book was a fun one, a bit of a rollercoaster at times and one I didn’t want to put down.  I received a free e-copy of this book in order to write this review. I was not otherwise compensated.

This fun and fast-paced rock-and-roll memoir from hit singer-songwriter J.T. Harding shows what it takes to go from South Detroit to the top of the Nashville charts.

In PARTY LIKE A ROCKSTAR, J.T. Harding charts his life from a kid growing up in Michigan to a chart-topping songwriter living in Nashville and working with country music stars like Keith Urban and Kenny Chesney. As a kid playing rock n’ roll in his parents’ garage, Harding’s was a world in which every taste of new music—from KISS to Prince and everyone in between—was a revelation. Inspired by his favorite artists, Harding abandons the classic “American Dream” and runs away to Los Angeles, where he forms a band and becomes part of the music scene there, all the while selling records to his favorite artists and producers at Tower Records.

A story of youth, rebellion, and determination, PARTY LIKE A ROCKSTAR is a memoir for music lovers and an invaluable how-to guide for anyone who wants to learn how to write a hit song. Fun and heartfelt, Harding’s memoir is the story of one man’s unshakable love for rock and roll, how it guided him through some of the greatest tragedies—and greatest triumphs—of his wild and unvarnished life.