July 4, 2022 by ConcertKatie No Comments 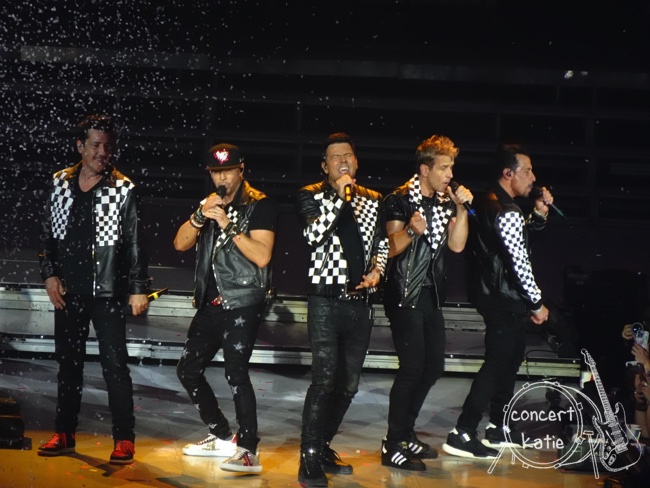 Friday and Saturday I made my return to the Arena at Mohegan Sun for the first time since 2019 for NKOTB and their Mixtape Tour 2 – featuring Rick Astley, En Vogue and Salt n Pepa.  The show was supposed to start at 8 and I assumed doors were at 7, so I was pleasantly surprised when I arrived on Friday at 6:45 and was able to get right in.  For Friday’s show I had front row upper level, right by the main stage. For Saturday’s show I was further back in the accessible section, but with a straight on view of the main stage (Friday the screen was a bit obstructed) and a closer view of the B Stage.  While Saturday night was a more head on view, when NKOTB first took the stage with all the flashing lights I really thought I may have had to ask to be relocated because it was just way too much for me. (While I’ve never had a seizure, with CP it is always a possibility) Fortunately after the first song or two it calmed down a lot and I was able to stay where I was.

I typically try to avoid reviews before going to shows so I can come up with my own thoughts after, but I did read one about this tour.  It said that the acts alternated like a mixtape – so I thought they would rotate out after every song, which was not the case. But the additional acts weren’t treated like openers.  NKOTB kicked off the show and did a handful of songs before En Vogue took the stage.  Both nights on of the En Vogue ladies had her foot in a boot.  On Friday, she sat during their initial set but by Saturday she was up on her feet for all their songs.  Rick Astley was next and then NKOTB came back.  After another handful of NKOTB songs, Salt N Pepa took the stage and was joined for En Vogue on “Whatta Man” before En Vogue got another song to themselves. Another chunk of NKOTB songs and Rick Astley was back to rick roll us all.  Donnie joined Salt N Pepa for Shoop on the B stage. Jordan sang without a shirt. (What else is new) and then it was just about time for the show to be over.

Friday night, when they all came out for the encore, Donnie stopped a young man from leaving and he and another girl were called up on stage.  I thought I had seen the young man with Joey’s son Griffin (Who helped open the show with Illtown Sluggaz both nights) earlier in the night so I thought it might have been a set up and he was a plant.  I figured I’d know for sure if the same thing happened Saturday – but Donnie instead called out a couple on the other side of the stage and made them go back to their seats.  Saturday at the very end Donnie brought a different even younger boy up on stage to dance for a bit.  Joe also grabbed someone from the barstools and had her come up on stage at one point as well.  Even though the setlist may have been the same (and really, has it changed much in the last 10+ years? lol) every night is always a little bit different.

I ended up with 449 photos on my camera over the 2 nights and honestly don’t feel like uploading that many here – so you get the one up top. Maybe if I get bored I’ll add a gallery later, but I’m not liking how the main blog page doesn’t show if I’ve added a gallery so I need to sort that out…

Edit this setlist | More New Kids on the Block setlists