In October 2019, The Ridgefield Playhouse booked a show with Mandy Moore, who hadn’t toured in over 10 years.  On December 20, 2019 I spent $135 on a ticket to see Mandy at The Ridgefield Playhouse on Saturday, March 28, 2020.  You can probably guess what happened then.  March 24th – it was postponed to a date TBD.  In October 2020, it was rescheduled to Sunday, June 20, 2021.  Then nearly the whole tour got canceled, but somehow the CT and NJ date survived.  It was then rescheduled for Tuesday, June 21, 2022.  914 days after I had bought the ticket, I got to see the show.  I am not sure I have waited that long for anything else before in my life! The Playhouse even renovated their lobby in the time we waited – and it looks awesome! Way more spacious than it had been.  Mandy had some changes too – she and her husband (who is on tour with her in her band!) welcomed their first son, Gus, and now she is 6 months pregnant with their 2nd son right now!

The opening act was named AHI – a singer from Toronto.  His set was a bit of a roller coaster – but in all the best ways.  He did one song about having to give up on someone because the love you have for them isn’t more than the love they have for themselves, a song for his wife (who is also his manager and currently at home taking care of their 4 kids!) and probably the most powerful a song that he had dreamt and woke up to write about the senseless gun violence against blacks that he dedicated to all the mothers who have lost their children.  Definitely check him out if you can – he seems to be doing pretty well on Spotify and I really enjoyed his songs and his storytelling in between his songs!

Then it was time for Mandy – who came out and said “We finally made it!”  I also liked the stories that Mandy told in between her songs as well.  If you knew me in high school – you’d know I absolutely was NOT a Mandy fan.  Mostly due to jealousy because she got to open for *NSYNC and was in an episode of 2gether!  You know, all the legitimate reasons for a teenage girl to not like another teenage girl.  I obviously knew “Candy” and “I Wanna Be With You” but that was the extent of it until her 2020 release “Silver Landings”.  I also hadn’t gotten the chance to listen to her latest release, “In Real Life”, before the show. (Though I’ve had it on in the background as I write this!) But I thought she did a great job of mixing in some older songs (Apparently “Only Hope” is a popular oldie – I’ve had 3 people ask me if she sang it – and she did!) as well as songs from both of the new albums she is kind of touring with together.  I unfortunately opted to not keep track of the setlist and while setlist.fm has several shows up, it doesn’t have anything from CT so the following is a bit pieced together from me seeing what seemed familiar and what she seemed to play consistently at her other shows on the tour.

Every Light was done acoustically with just her husband on guitar and the rest of the band had left the stage.  I’m not sure if it was my spot in the theater or what, but I found for some of the softer ballads her voice was a bit drowned out and overpowered by her band (who were excellent, by the way).  But overall the show was a lot of fun and dare I say worth the 914 day wait. And I’m probably still a bit jealous of Mandy (now she got to work with Milo Ventimiglia and Justin Hartley!?) but can deal with it like an adult. 😉

She kept saying she just had a few more songs – but hadn’t done Candy yet! (And she was selling a Candy shirt so I figured it HAD to have been coming, even though she did talk about trying to come to terms with that chapter of her life and moving on)  When she came back out for the encore she said of course she couldn’t NOT do the song.  The second song of the encore was a song that she had sung on This Is Us and talked a bit about how she had spent the last 6 years on the show and initially wasn’t sure if she wanted to get back into music or not – and Mike and Taylor (members of her band/her best friend and husband) had kind of gotten her back into it and also that This Is Us did as well with her character’s backstory.  It seemed fitting that the encore was kind of her first song and last song (for now, anyway) and kind of bookended her career thus far. 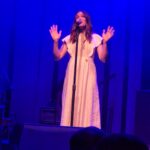 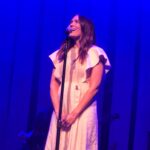 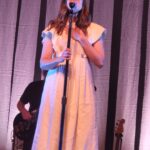 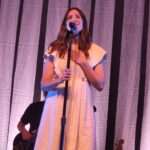