Gaelic Storm at the Wolf Den 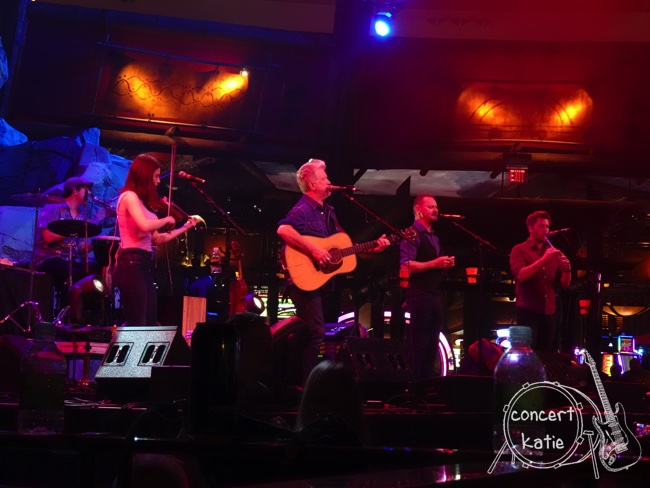 Saturday night Gaelic Storm returned to the Wolf Den at Mohegan Sun.  I had not been to Mohegan since 2019 and was sad to see while everything else seemed to be the same, my favorite machines were no more.

We waited in line for the 3 hours before the show, since the last time we went to see them we barely made it inside.  It seemed like despite being a Saturday night, people were a lot more fashionably late to arrive and for a while we weren’t even sure the small place was even going to fill in.

The band took the stage at 8 with their new fiddle player, Natalya Kay. She seemed to fit right in and I thoroughly enjoyed the evening.  Lionel Richie was playing in the Arena and they made a few cracks that we could “even dance on the ceiling!” “Hello!” showing that they knew what they were up against (and at the end, thanked us for going to see them instead of Lionel)

While there was a lot of clapping in the first song, for the second we were told we needed to wave at them… for the whole song… and that the song was 46 minutes long.  It turns out that it wasn’t and we didn’t even need to wave the whole song, just when we were instructed to.  But there was indeed a lot of clapping because at one point my Garmin said I was at 998 steps and by the end I was into the 1200s.

They also made some jokes about driving on 95 and that it has been around since BC but they have been working on it ever since.  I mean, it’s probably not too far from the truth. Some stretch of it is always under construction.

Another cool thing they did was partner with set.live, a website where you can check in to the show you are at and sign up for the artists mailing list.  At the end of the show, they selected 2 winners from those who had checked in to come on stage and get a personalized signed poster.  The site seems really neat and I’d be interested to see if any other shows I go to end up incorporating it.