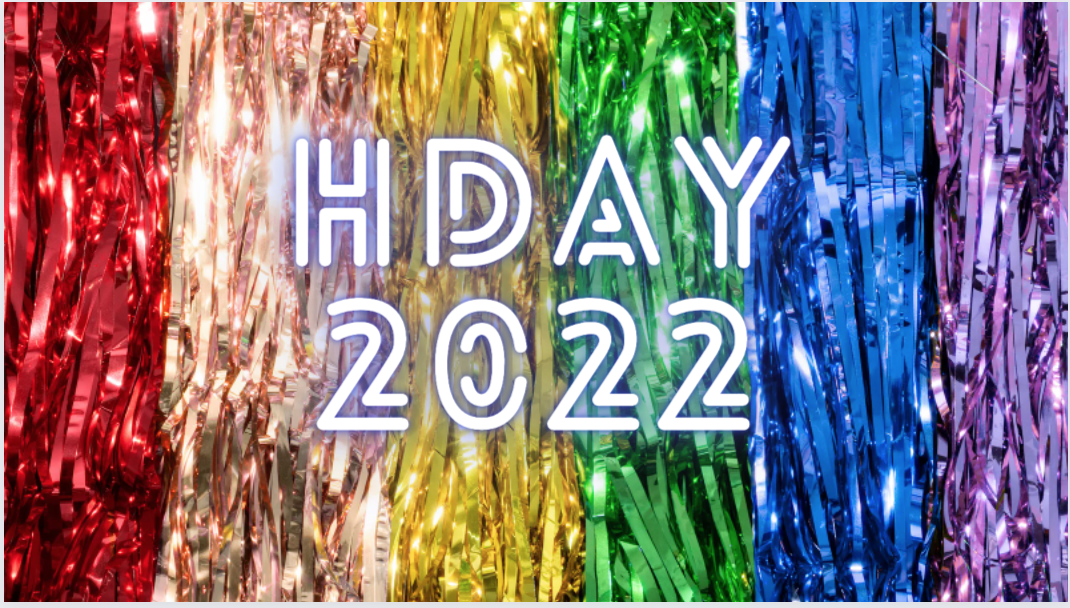 Wednesday, May 11,  I made my way to Westchester County Airport in White Plains to begin my trip to Tulsa.  For whatever reason, Delta had no options out of Hartford with longer than a 40 minute layover and the ones out of White Plains were 3+ hours each way.  When it was about time to board I overheard someone talking about “lots of damage” and figured I’d end up going 0 for 4 on trips this year going smoothly.  I was right.  It turns out the plane I was set to board had hit a bird (“a big bird”) on its way into NY and they needed to call someone to inspect it and clear it for flying before we could board. With the talk of damage I thought for sure we’d need to wait for a new aircraft, but fortunately once someone came on site it was cleared and we were only delayed about an hour. (Good thing for that 4 hour layover in Atlanta, I guess.)

I met up with a friend upon landing in Tulsa and we go the shuttle to the hotel.  I immediately changed out of my plane clothes to hit up Ida Red for some special T-Shirts they had made, but ended up getting distracted by spotting Taylor on the sidewalk outside the studio.  I said hey, got a quick pic, made it to Ida Red only to find out they already sold out of all the shirts (what!? hardly anyone was even in town) and met up with friends for dinner at The Tavern.

Thursday I lined up early for the store and was able to get almost everything I wanted (one item was the wrong thing but hopefully customer service will be correcting that for me!) being one of the first ones in there.  I ended up doing some volunteering and then it was time for HTP Live.  This is the first time that they had done it, and one of my friends got to be one of the reporters to interview them so that was really cool.  We weren’t entirely sure how it was going to work or if it was going to be running on time, but it did end in time to remove the chairs for karaoke!  Isaac has been hosting karaoke for the past few years but this time it was 90s themed and people really went all out with their outfits for it.  I liked the 90s throw back songs way more than the excessive Hanson songs, but it’s a Hanson event so of course that’s what most of the fans are most comfortable performing.

Friday I did some more volunteering and then we had the RGB Listening Party. On first listen, not a huge fan, but it always takes me a few listens to have songs really grow on me. I did miss the harmonies we are so used to hearing though.  Then it was time for the Storytellers Concert – which started off a bit like BTTI part 2 – but fortunately after a couple of songs they changed their direction in a way that made me happy. We’ve always sort of known that MMMBop came from a part in an older song called Boomerang.  Recently discussion about it had come up again on the Hanson.net forums and someone had mentioned that they did a part of it during “The Story” at 5 of 5 in London and I had gone looking for some crappy YouTube footage of it.  Getting to see it all in its entirety was really awesome since they hardly ever play the songs they had written before Middle of Nowhere.  They also threw their shortest song, Watershed, into the set which I had previously heard just once before.  I was a bit disappointed we didn’t get any of the new EP “White Rabbit” especially since Zac had mentioned he had a story about one of the songs (and what better time to tell that than during Storytellers?) but I understand that they put most of their focus into working on the setlist for the RGB Tour. 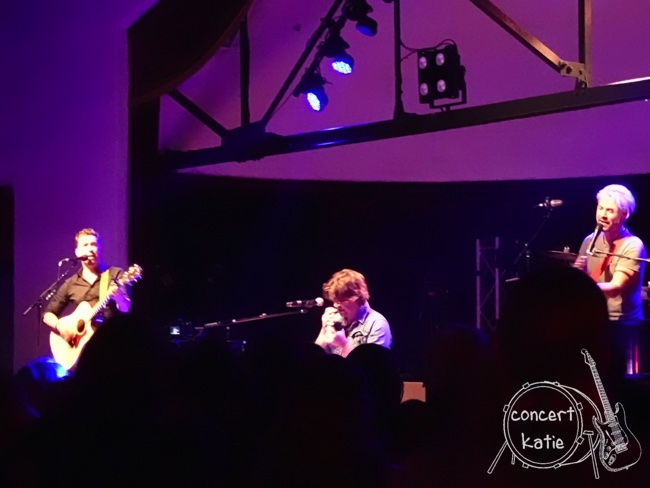 After the show was the Dance Party – I was giving out glosticks at the door and by the time my “shift” ended, Taylor had decided the equipment was not working and that we’d have a redo the next night instead.  Got 1 photo in my care bear outfit I made just for the dance party… so that was a bit of a bummer.

Saturday we had the ST Leaders lunch with Hanson and due to some communication issues, we were *just* about to eat by the time the guys came in to talk to us.  If you told 12 year old me I would be in a room with Hanson and would opt to stuff my face with pizza instead of engage in conversation with them, she’d have been horrified. Isaac did talk about movies with my group for a bit, but I figured it was the safer bet to not let me get to level “hangry”.  We ended up going to local brewery Nothing’s Left next as they were doing a Hanson collab/inspired flight with 3 sour beers – red, green & blue.  (Blue was my fave) I also had to get my fave stout of theirs, Deez Nuts and then they had a pineapple dole whip as well so… of course.

Then it was nearly time for the “Members Only” show.  While this show typically has more members only content, it was the unofficial kick off to the RGB tour so it was…. lots of singles.  Not my favorite for a trip to Tulsa but as I always say I’d rather be at a Hanson concert than anywhere else, and having most of my friends back by my side made it just a bit sweeter.  I do hope they will end up rotating in and out more RGB songs (maybe through solos) on tour though. 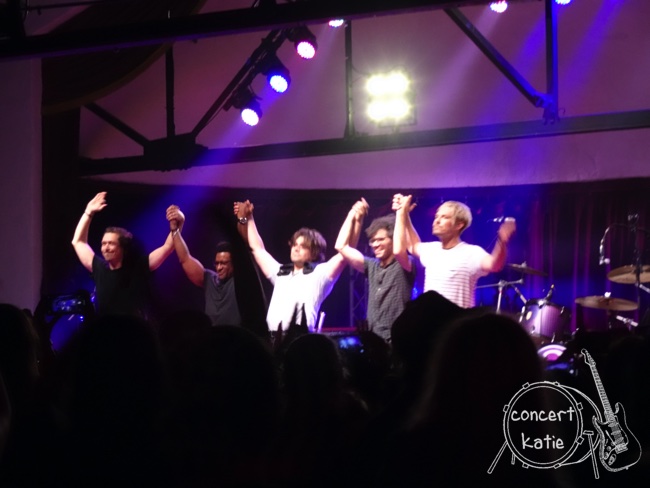 After the concert it was time to try and find food – ended up with MORE PIZZA! And then Taylor’s 2nd attempt at the after party.  This one was a success but I did not have time to change into my dance party outfit again.   (I did still manage to be on theme since I was wearing Chuckie from Rugrats shirt)

Sunday I met up with some friends at the Tulsa Drillers game.  When the visiting team took the lead of 3-0 in the top of the first, but the drillers got 2 back to make it 3-2 after the first, I thought this might be a nice back and forth game.  Unfortunately the Rough Riders kept pounding out HRs and in the end the Drillers lost 18-4.  But most of us were just baseball fans and not really rooting for either team, so having some downtime to chat while at the game was nice compared to the usual hustle and bustle going on Sundays during HDay weekend that is Hop Jam. 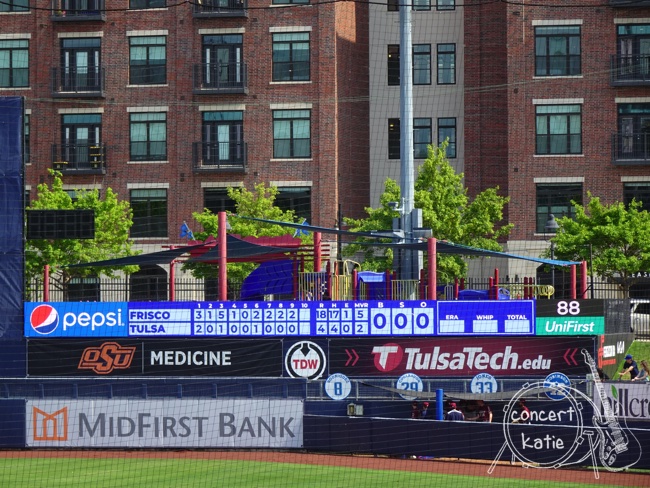 Monday I managed to fly home without incident (aside from no one with a wheelchair ever picking me up at the gate in Atlanta) and the shuttle to the parking lot was there waiting for me.  Apparently they had even called looking for me while I was trying to figure out how to reach my luggage on the carousel.  Of course, 2 seconds after we got out of the shuttle, it started sprinkling which gave way to a sudden downpour as I tried to load all my luggage back into my car.  There also was news spreading of a few friends having tested positive for Covid upon arriving home. I joined that club as well. 10 days later I tested negative again and blame the delay of this post on that.  I’m still not 100%, but getting better every day.