Book Review: The 7 Rules of Moving On

February 19, 2022 by ConcertKatie No Comments 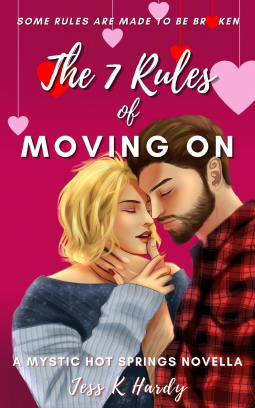 After Valentine’s Day I was looking for something a bit light hearted to read and I stumbled upon The 7 Rules of Moving On which was a novella so I thought it would be a quick and easy read.  I must have picked it up at all the wrong times, because I fell asleep during reading it SO many times – even when my kindle said I only had 4 minutes left.  In theory, the story line was great, but I guess it just wasn’t grabbing my attention like I had hoped.  (But it WAS steamy as promised, so there’s that!)

Kissie and her best friend have a weekend getaway to help get her best friend’s mind off of her recent breakup.  While away, she meets a really hot bartender.  A couple of years later, they end up having ANOTHER getaway because this time Kissie was the one having the break up.  The really hot bartender, Trig, has not stopped thinking about Kissie since she was last there.

But Kissie has 7 rules of moving on – and being with Trig wouldn’t be following, well, any of them.  But it’s right around Valentine’s Day and Twin Hearts is the perfect place to be to find love. Or so it would seem.

Without giving too much away – there was some drama, some will they, won’t they, some thoughts about is going far away for a job that’s not your dream job worth it.. and just what kind of magic is in that pool that brings talking bears to it?!

Overall it was a fun Valentine’s Day read, but probably not my favorite quick read ever. I wanted to like it, but it was just tough to get into it and stay hooked.  But if you’re looking for light hearted and steamy – this ones for you.

A lighthearted, low-angst, sweet and steamy Valentine’s Day novella perfect for fans of Tessa Bailey, Emily Henry, K. A. Tucker, and a little bit of magic with their romance!

For jingle writer Kissie Mitchell, rules are all that stand between order and chaos. Determined to move on from a breakup and a stagnant life, she heads to Mystic Hot Springs—a resort in the remote town of Twin Hearts, Montana—for a Valentine’s Day getaway with her best friend before embarking on a new job in Seattle and a more exciting life. She’s armed with a laminated list of rules to keep her heart safe and a simple plan: find a rebound guy, get lucky, put her ex behind her. Not part of her plan: the resort’s sweet and smoking hot bartender, Andrew Trig.

Trig, with his soulful brown eyes, thick beard, and Keanu Reeves good looks, is not no-strings-attached rebound material. He’s sell-all-your-stuff-and-move-to-the-middle-of-damn-nowhere-for-him material. Kissie is determined to keep her distance, but when he offers to act as her wingman for the weekend after her best friend gets sick in exchange for her help convincing Mystic’s owners not to sell the resort he loves, she can’t refuse.

The more time Kissie spends in Twin Hearts, she’s charmed by the town, by Mystic, and by Trig. As the sexual tension between them steams up the windows more than the hot springs water, Kissie will learn some rules are made to be broken. When a single night calls into question everything she thought she wanted, she’ll have to decide if big feelings will send her running away, or if sometimes moving on means staying right where you are.

Welcome to Twin Hearts! Where magic is in water, love is in the air, and talking bears play cupid.

Kissie and Trig came to me one night begging to meet. They were in the bar. Kissie was wearing a polka dotted mod dress and Trig was in jeans and a flannel. Kissie was all over the place, buzzing around and spilling her drink but absolutely convinced she had her life together. Trig was leaning against the door frame, arms crossed over his chest, grinning at her and thinking, “She is the woman of my dreams.” Literally. I adore these two love-struck goofballs and I sincerely hope you do as well. Stay tuned for book 2 this summer! If Ryan plays his cards right, he might finally get his redhead.