January 27, 2022 by ConcertKatie No Comments

Back to the Island 2022… I’m not going to lie, in the days leading up to this trip I was seriously hoping it would be canceled so I wouldn’t have to cancel it myself.  There was so much stress and anxiety about getting a negative covid test to get into the country (even though I went nowhere for 10 days before I left, other than for my covid tests of course) and what would happen if I tested positive while I was there and needed to quarantine for 5-14 days.

But I finally had a negative PCR and Antigen result in hand and was ready to go to sleep at 8pm for a 2am wake up when Southwest emailed me that my flight from Hartford to Baltimore was canceled.  I considered driving 4 hours to Baltimore and cutting out the Hartford portion (since I’d be returning through Baltimore too) but some friends were leaving out of Boston on American Airlines so I last second booked a brand new flight and Southwest rescheduled me for 2 days later when I was panicking.  Arriving 2 days later wasn’t going to cut it, so I canceled that flight and hit the road to Boston to meet a friend. (Shout out to her for staying up all night to wait for me to get there and then for it to be time to go to the airport for a 5am flight #teamnosleep)  We made it there without any other hiccups and got the shuttle to the resort. [Now to wait and hopefully get reimbursed by my travel insurance for all the last minute expenses *fingers crossed*]

Upon arrival at the resort, our temperatures were taken and our luggage was sprayed down with sanitizer.  We checked in and got our bags taken to our room and settled in a bit before a group dinner. All the restaurants made you sanitize upon entry and wear masks until you were seated/eating.  All the staff had on masks and some also had on face shields. Areas that were normally buffet, you were served by staff behind plexi glass. It was an early night for me, even though I slept a little on the planes, I needed a real night’s sleep!

The first real day of the trip we decided to line up early to make sure we got the color passes we wanted to try and be through the photo line as early as possible.  I ended up being the first through to register and my 9 year gift was a BTTI robe! It’s a pretty blue color. (I was also annoyed to see that the 4 year hat changed from a do you want fries with that red visor to a nice blue baseball cap! Fortunately another awesome friend of mine hooked me up with her husband’s and I can’t wait to add it to my baseball cap rotation)

Unfortunately just before dinner we found out that there would no longer be any group photos taken with the band “out of an abundance of caution”.  It was pretty frustrating that a very MAJOR perk was pulled out from under us at the last second and many of us were very upset and annoyed. (Not to mention, in the past we had 1 activity hosted by each brother and they already had combined Isaac and Zac’s event into one.)

We showed up to the first show a little tipsy and ended up having a lot of fun in the back just being obnoxious for the first few songs to get the frustration out of our systems.  (Who knew how many song lyrics could end up relating to covid?)

They didn’t give us any themes for shows or have us vote ahead of time, but I had hoped since they just did essentially all of their albums live in the summer concert series it would give them a lot more options and maybe there were a few “oh hey we haven’t done this in a while” that would end up in the set.  And as always – my goal is to hear as many new songs live as I can – though that is getting harder and harder to do. [Though with a new album and tour having been announced since we returned home, I’ll have 15 14 new tracks to try and catch on tour!)

Fun Fact: This was the first BTTI Dancing in the Wind was played at.  And I honestly almost turned to my friend and said “Hey, this setlist is pretty good!” when they started With You In Your Dreams.  CMON GUYS. Enough. (But I managed to make it through without crying, so I’m calling it a win.)  The Bob Marley cover(s) ended up being new for me so yay point for night 1. I was also glad they seemed to get a lot of the singles out of the way early.

Zac went first for solos and took a commanding lead for the solo competition I hold each year.  It got me 2 new songs – Change and a brand new song that he did called “Magic Man” that was about Nick Drake.  I’m going to have to consult my video to see if I can decipher lyrics at some point, but the set ended with me declaring him the brother to beat.

The second full band show was acoustic and “acoustic-ish” (I tend to only consider it fully acoustic if Zac is not on the drums so you’ll see that reflected in the list above)   I was incredibly happy to have Isaac throw “Only Wanna Be With You” into the setlist because I had missed the July shows where he had done that before and was pretty mad at myself for it.  As if I was not happy enough – after that song they told us that to make up for no photos – they’d be giving us each a ticket to the show of our choice on tour and we’d get to take a photo with them there.  (I’ve since redeemed mine for a show ON MY BIRTHDAY so that’s pretty exciting)  They also did a full band “Smile” for the encore which I hadn’t seen them do since 2000 so that was a nice treat.

While Isaac has won the solo competition before, he seems to be a bit stuck in a rut where “hey this was really popular last time I did it, so let’s do that again” and… no.  While his set wasn’t bad, he did not take the title from Zac, although throwing in a request of Soldier (which hasn’t been done in person since like 1998) definitely won him some points.  But – something to note – if I’m videoing a ‘rare’ song and Isaac is talking about the last time he thinks he played it – A) Isaac is probably wrong, so don’t listen  B) Don’t call my name repeatedly while I’m trying to record for verification – just because I have a database that will tell you the answer does not mean the entire database is also embedded in my brain. 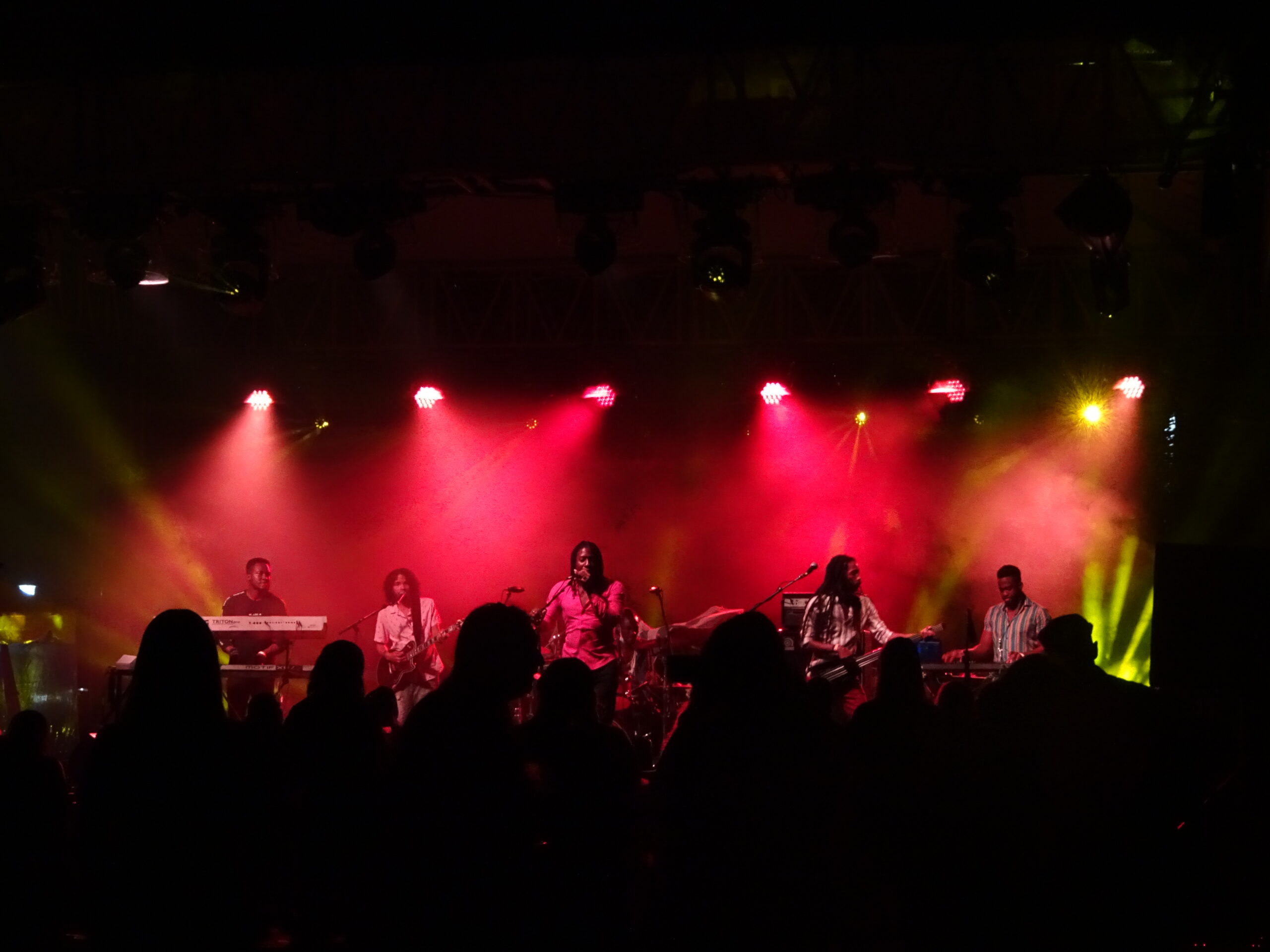 That night the special guest was a Jamaican band called Raging Fyah and I really enjoyed them! It was nice not only for it to be a full band but also a local band and the resort ended up having a big “Jamaican Night” for us with dancing and fire eating and a banquet so that was really fun.

The next morning we woke up early to get our covid test done and out of the way.  The resort would not be testing my room block until 4pm, but some friends and I got EMed tests to do via video just in case there ended up being a major line at the resort (there wasn’t.)  It was nice to get it done and over with first thing in the morning and know we were negative and could get home without a problem.  I went with my roommate for her test early and they let her in and gladly deleted me off the list after I showed them I was already negative. (I was initially just going to take both but started getting nervous about a potential false positive and missing the rest of the actives – and it turns out that was something that happened to someone else!)

The last day was Taylor’s solo set – and he blew Zac out of the water.  2022 Solo winner – Mr. Taylor Hanson. I had awarded it to him even before his set was over. He pulled “Out of My Head” out of… nowhere which had previously only been played once in 2001 (A random database fact I *do* happen to know off the top of my head – don’t ask me why)  He also premiered a new single off their new release called “Child at Heart” which I absolutely fell in love with.  This was when I declared him the winner – but dude kept going and ended his set with Sound Like Joy. So 3 points from Taylor and my favorite for the day (but don’t let him know that).

Then it was time for the final show. They opened with another new cover for me “Islands in the Stream” which they did last year when they did their ‘Islands and a Stream’ virtual Back to the Island concerts.  Nothing really of note in the rest of the setlist – but it was a decent one.  I was however surprised they only did 3 songs from the newly released “Against the World” and one of them was not the title track. I’m not sure if they are just over that album now or what.  They didn’t play any of it at the 2020 event, when it was supposed to be coming out later that year at that point so it is a bit of a head scratcher.

The next morning I got up early to try and get on a shuttle an hour earlier than I had been told to be on because waiting for a wheelchair can take forever and I wanted to give myself a buffer.  The bus ended up stopping at 2 other resorts and I would have been panicking hard core if I hadn’t gotten on the earlier one – but despite a delay in finding a wheelchair pusher, I had plenty of time to wait. (And freeze. The airport was very cold!)

My layover was in Philly and they were very efficient with getting a wheelchair and getting me through security.  I had a 4 hour layover and the flight at my soon-to-be gate was going to be leaving in 30 minutes so I was prepared to have some snacks once it cleared out and they all boarded.  I took a bathroom break only to find out my gate changed from terminal C to A and when I was asking the gate agent to get me to gate A, they asked me if I was willing to get on a flight leaving in 30 minutes to Boston instead.  I agreed and they raced to get me boarded – the plane was WIDE OPEN and it got me into Boston 2 hours earlier than my initial flight (which ended up being delayed) and I was able to drive the 2.5 hours home and get home at 10pm instead of the 1am I was expecting! Finally, an airport win for me.