Book Review: All I Want For Christmas is the Girl Who Can’t Love

November 22, 2021 by ConcertKatie No Comments 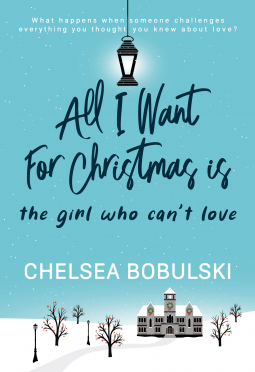 All I Want for Christmas is the Girl Who Can’t Love is actually the 4th book in the “All I Want For Christmas” series.  I am always hesitant jumping into a series book without having read the earlier books, but this worked as a standalone.  There was a bit of a recap at the end with I assume the characters from the previous books which was a little confusing but I was able to make it through everything but that part with no problem as if it was a standalone book.

I had been taking a break from romance, but the write up totally caught my eye because the main female character, Savannah, could have been me – and the male lead, Jordan, may have reminded me of a certain someone too.   Savannah has just started college and is struggling.  Her roommates are on a completely different schedule than her and she is having trouble getting a decent night’s sleep.  She also has dyslexia which has gotten more difficult to manage with the less sleep she is getting.  She met Jordan her first day when she was trying to move a mattress into her dorm room and he insists on helping her out.

Jordan and Savannah become friends, he tells her she can nap in the library and ends up dictating her textbook to her to make it easier for her to study.  Meanwhile there is a sub plot of these war time love letters that Jordan has been researching.  Jordan tries to convince Savannah that love is real through these letters, but she is still not convinced.  The two of them end up discovering even more of the letters between Bex and William which will really help Jordan in his research and applying to PhD programs – but will it convince Savannah that love is real? And will the two of them end up more than friends?

This book was a pretty quick read and once I got about halfway in, I couldn’t put it down.  I had somewhere to be and decided I’d just show up late, because I couldn’t leave without finishing out the story to see what happened and how things with Savannah and Jordan ended up.  I really, really enjoyed this book and maybe now I have to go back to the other 3 books and see if those are just as enjoyable.

Get swept up in this holiday romance as Chelsea Bobulski’s All I Want for Christmas young-adult contemporary series comes to an end by exploring the hope and magic of unforgettable love.

College freshman Savannah Mason doesn’t believe in magic or true love. She believes in science, and science tells her that love is nothing more than a biological impulse to breed—an impulse that can, thankfully, be ignored. Which is a good thing because no woman in her family has ever been lucky in love. In fact, all of them have ended up broken hearted and insistent on blaming a mysterious, vengeful curse. But Savannah is determined to rewrite her story, and as far as she’s concerned, she’s never going to fall in love.

Jordan Merrick is a junior at William & Mary and on the fast track to obtaining his life’s goal: becoming the next Ron Chernow. He vaguely imagines that, someday, he’ll have a wife and kids. But like Hamilton himself, Jordan’s drive is to accomplish his goals as quickly as possible. Love can come another day once his career is cemented.

What neither Savannah nor Jordan planned on is meeting each other, and as they keep crossing paths on campus and Savannah finds herself helping at Jordan’s archaeology site, all their reasons for putting their love lives on the back burner start to blur.

Forged together, Savannah and Jordan investigate Savannah’s family’s curse on love and explore a collection of love letters between a revolutionary soldier and the girl he left behind. But when they come face-to-face with the truth about themselves—and with the truth about what they’ve become to each other—Jordan’s outlook on love starts to waver, and he begins to wonder if he can convince Savannah that love is real. But will Savannah run before her heart is able to let go of cynicism and believe in the power and magic of love?

At once thought-provoking and charming, All I Want for Christmas is the Girl Who Can’t Love will stir a longing in every reader’s heart for the hope in magic and romance that can only be found during the holiday season.