Hanson has been hosting a “Summer Concert Series” at their local Cain’s Ballroom in their hometown of Tulsa, OK.  In addition to being in person shows, they also are streaming them online.  For July, I had bought streaming tickets only.  (holiday weekend flight prices were IN-SANE) For August, it was a good friend’s birthday, so I decided to make the trek to surprise her (plus, I hadn’t been able to see her since May 2019!)

The flights there went well, on my first flight, I met a little girl who also had CP and also wore a brace on her left leg.  Her Mom and I chatted a bit about different surgeries we had each had and what ones she had upcoming.  When I landed in Atlanta, they asked us to wait as they needed *8* wheelchairs for the flight.  Good thing I had a long layover to get myself to the next gate! Many were worried they’d miss their flight while waiting for someone to push them.  While I was waiting to board the flight to Tulsa, a little girl came and circled me, inspecting my brace from every direction.  I guess it was to her satisfaction as she then decided she would sit next to me, never saying a word to me at all.

After landing in Tulsa I picked up the rental car, headed to the hotel, ordered dinner and managed to get all settled with 10 minutes to spare before Big Brother was on. 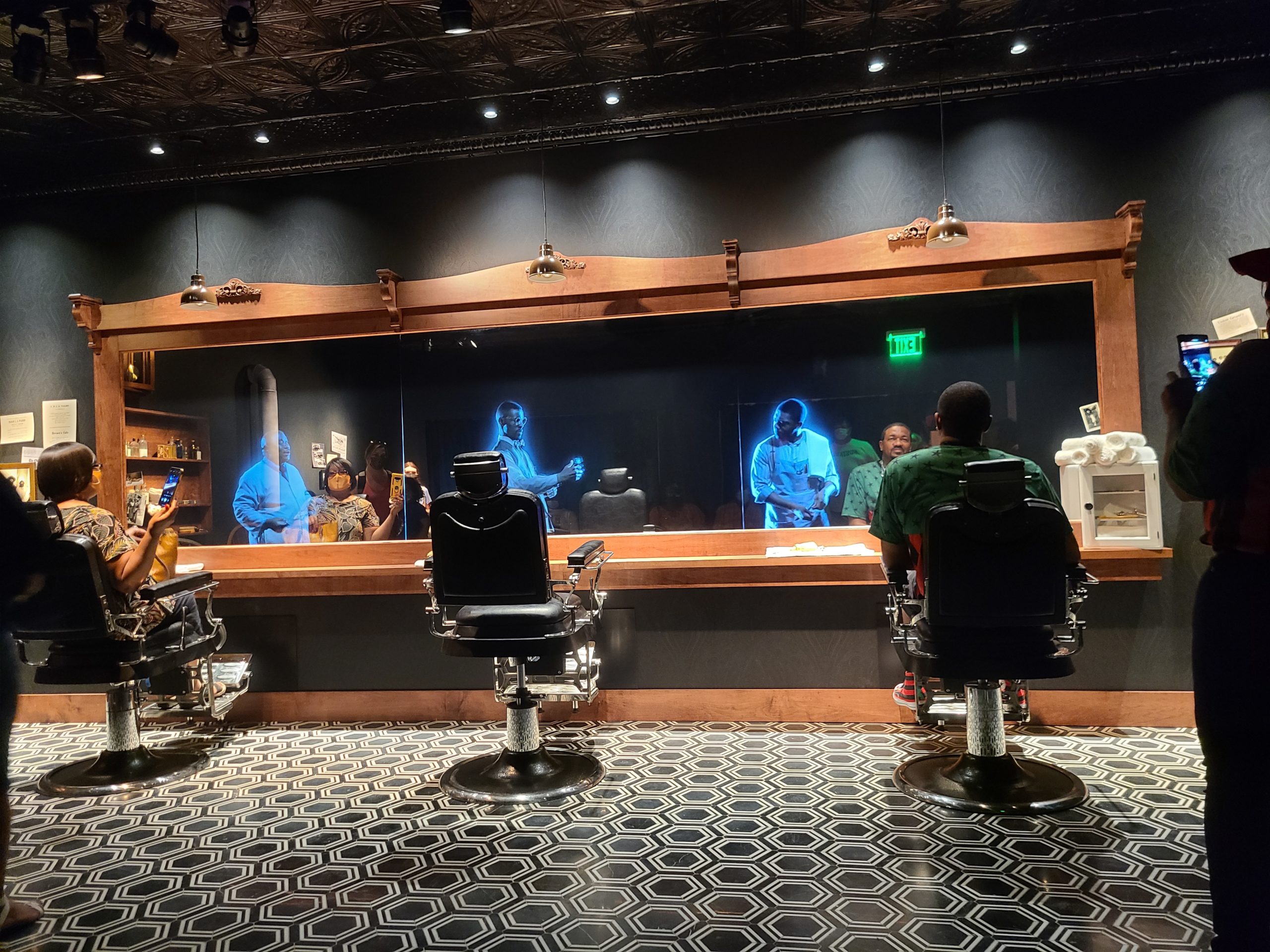 Friday I decided to check out the new Greenwood Rising. It had just opened earlier that week and tickets were free.  Tours are guided (or you can go off on your own, but the guides unmute all the video content) and in groups of about 20.  I was glad that most of my group were wearing masks.  There are several different rooms that show you how Greenwood was growing and prospering.  Then of course, there is the massacre.  There is a video that is played with the story of some of the survivors.  If you think it may be too emotional for you, they have an emotional exit to skip that part of the exhibit and go right ahead to the next section.  I didn’t end up skipping it, but I was glad they had that option for those who might not have been able to handle it, so they could still see the rest of the exhibit.  Every other room it seemed had a spot to sit, which was very nice for me to take a break in between looking and reading the exhibits and checking out the artifacts.  I think that given the chance, I would go through again self guided now that I had seen all the video content that did justice to the Graphic Design Service Subscription, so I could fully read everything in the rooms without being blocked by the rest of my touring group.  The video effects are pretty cool, so I don’t recommend doing self guided for the first time through. 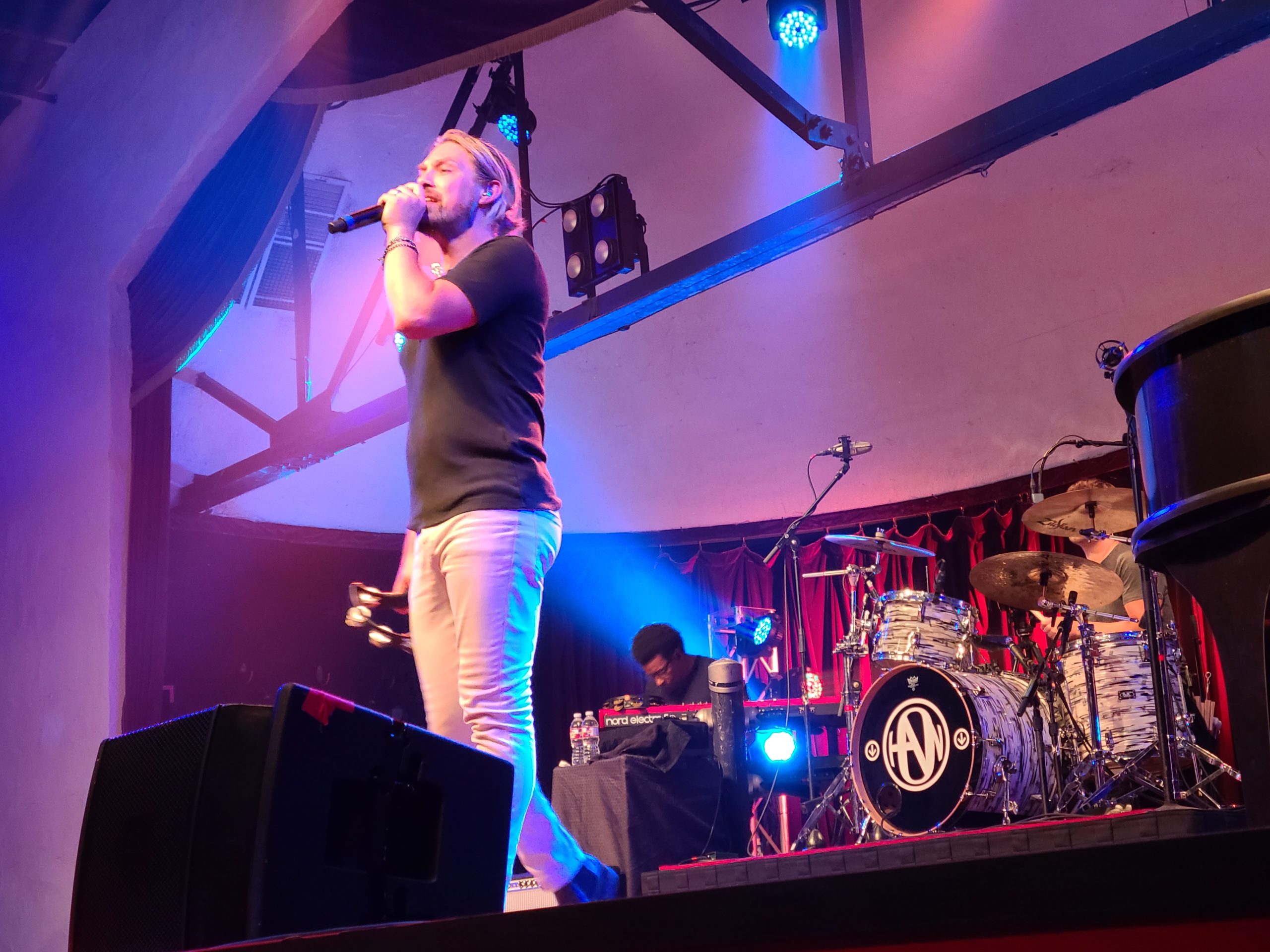 Friday I was also playing secret squirrel for a friend who decided at last minute she was going to show up and I was frantically tracking her flights to see if she’d make her connection in time or not.  She did end up landing just before 6 and made it down to the venue just before doors to surprise everyone! I was also pleasantly surprised that the venue put together such a nice ADA area right in the front with chairs for everyone.  The Friday night show was ATW + Underneath, Underneath being Hanson’s 2004 release – their first independent album after leaving their record label.  From where I was positioned I couldn’t see Isaac and Zac was blocked by his cymbal, but it was the Taylor show. (And Zac did come over to the piano to sing one of my favorite songs, Broken Angel.)  The guys had been saying they’d play “select songs” from the classic albums during this concert series but they played everything from Underneath except for the bonus track, Lullabelle.  They also threw in a couple of covers from that touring era and all 4 tracks off their new project, Against the World.  After the show I got to hang out with the Birthday Girl for a bit and then headed back to the hotel for the night.  I heard 1 new song during the show – Only Love. (The other 3 new tracks I had heard previewed on the Wintry Mix tour) 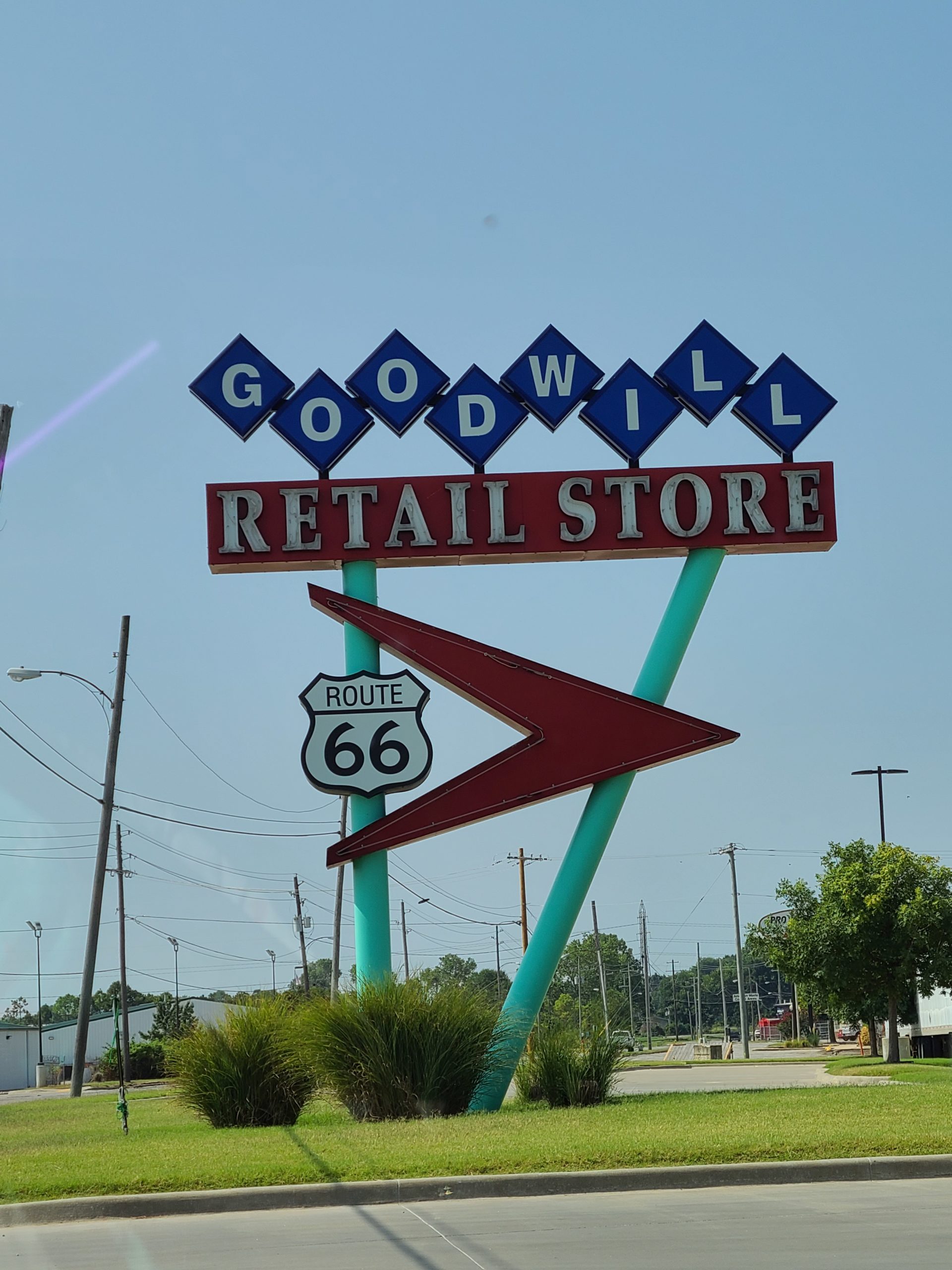 Saturday I took a ride down Route 66 and went to the Goodwill because they were giving out free totes with some goodies in them to the first so many people who showed up.  The store was mostly clothes and I wasn’t sure how much room I’d have in my luggage so I didn’t really check anything out.  I also tried to get to to the Kendall Whittier area of Tulsa to check out the bike racks that are all “KW”s (my initials) but they were having some sort of block party so I didn’t get to drive past and wasn’t up for finding parking and walking in. It was H-O-T all weekend.  After the scenic route of the Tulsa highways (I missed an exit) I went back to the hotel and took a trip to Antoinette’s bakery for some treats! 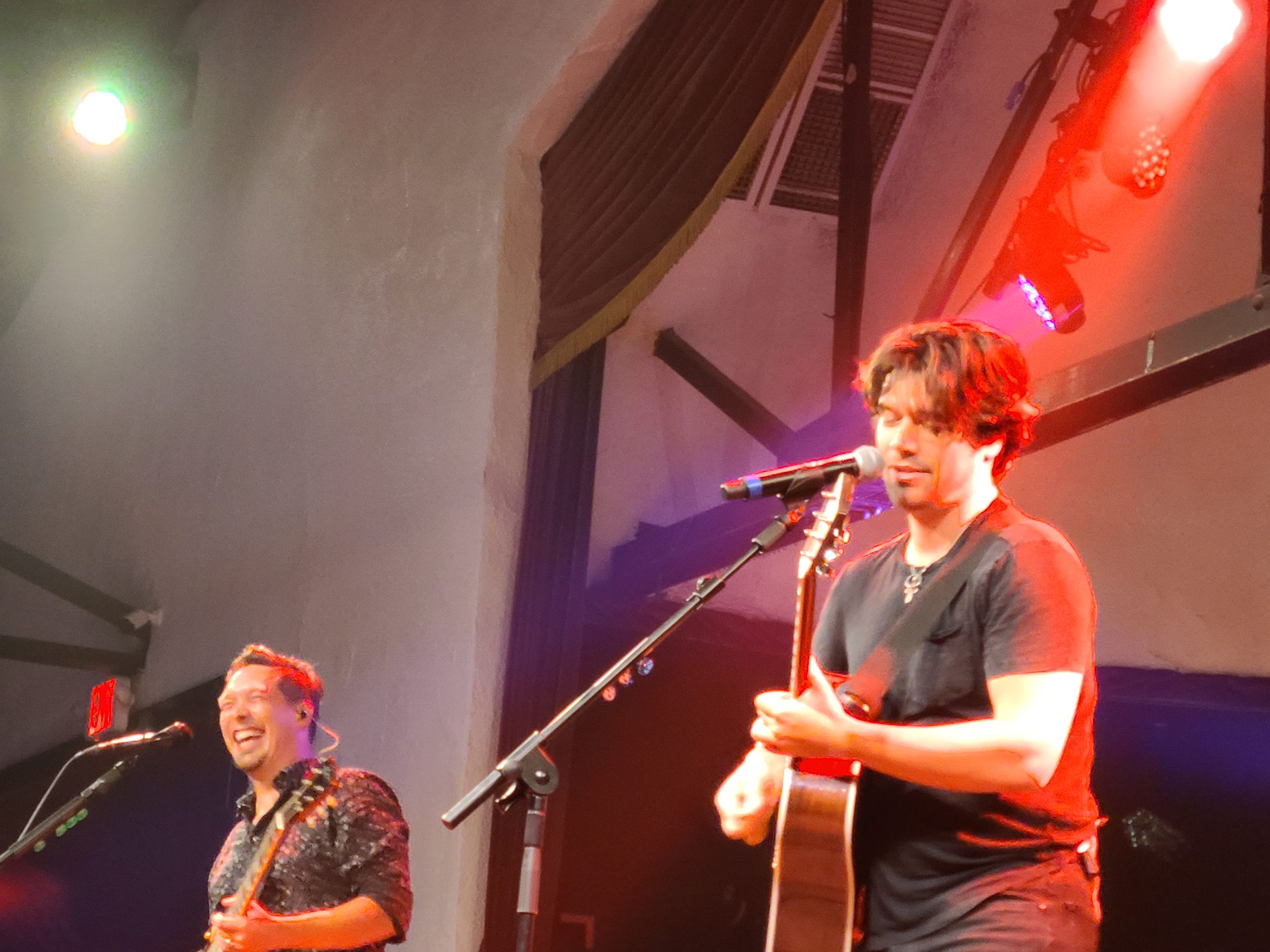 Saturday Night’s show was ATW + The Walk.  There were a couple of long shot songs I was hoping for that I hadn’t heard off the Take the Walk EP and I was sad to see that Isaac had initially listed one (Lay Me Down) as his solo on the setlist, but opted to do A Minute Without You instead.  But here’s the thing – before I saw the setlist – I thought Isaac’s solo was absolutely amazing.  He had the crowd sing the “Oh Yeah”s that are usually Taylor and Zac’s parts and when he finished the song the crowd absolutely erupted! It was the first time hearing a large crowd like that in quite some time for me and was awesome.  So while, yes, I would have loved to hear Lay Me Down, I’m not sure I would have traded that solo for it.  I also had scooted up in my seat a bit so I was able to see Isaac and Taylor for most of the show and Zac only when he went to the piano for The Walk and up front with a guitar for Fire on the Mountain.  Also interesting was that many of my friends had never heard “Your Illusion” live, it had only been played about 20 times before this show – yet some how I managed to be there for 8 of them?  Pretty wild.  In the end, no new songs for me on Saturday, but it was a really fun, high energy show.  After the show, we headed to the back and while I missed Isaac, I managed to get photos with Zac and Taylor that look like we are in jail.

Sunday afternoon I returned the car and headed to the airport and was there pretty early.  We were supposed to take off at 3:42 but at some point it became 5:20.  I had about a 3 hour layover in Atlanta and was keeping an eye on the incoming flight which kept saying it would take off in 5 minutes, and then reset the count.  The later it got, the less likely it would be that I would make the connecting flight so once things started getting iffy I asked my friend who was staying in Tulsa another night if I could crash with her (she said yes) and called the hotline to be put on the earliest flight out the next day.  If I stayed the night in Tulsa or Atlanta, I wouldn’t get home until the same 3pm flight, so it made more sense to stay where I knew people.  I did end up having a Hanson sighting as they left the Nightcap recording so I guess that was my silver lining.

Monday morning I left the hotel at 3:30am, got through security without a problem and managed to switch my middle seat on Flight #1 to a window seat.  I wasn’t sure if I had ever had a middle seat before and I don’t think I am suited as a middle seat flier (but if it was that or nothing, I’d put up with it for the 2 or so hours).  My 2nd flight I was #1 on standby with 19 available seats so I figured I’d make it on, and I did, but another window seat.  I tried to switch it and couldn’t, but wished *really, really* hard… and after pre-boarding and my aisle seat mate showing up we started wondering if our window seatmate would even show up.  It was almost time to take off and 3 more people boarded… We figured our luck was up, but nope, the door shut and no one showed up for the window, so I took it!  And fortunately I have a very understanding work manager and was able to work some magic so I don’t have to make up any hours this weekend when I am supposed to be volunteering.

Now to unpack and repack to head off to Iowa in just a couple of days.