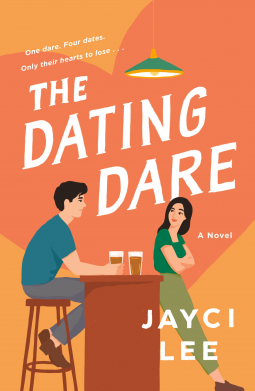 The Dating Dare is the second book in a series. I hadn’t read the first one but I don’t think that left anything out for me in this one.  This book focuses on Tara and Seth.  Tara’s best friend had just married Seth’s brother.  The two connect at the wedding and end up playing a game of truth or dare which ends up in them agreeing to have 4 dates with each other before Seth moves to Paris for a photography job and the rules are they won’t fall in love.  I’m sure you can guess what happens 😏.

I loved both of these characters and the banter they had. They came up with a scheme that Tara was helping Seth make a website for her friend while she was away on her honeymoon so that no one would catch on that they were seeing each other.  Of course as expected they both start to fall for each other and that is what causes a conflict between them.  I won’t say too much else for fear of giving it away, but this was a really cute love story that I really enjoyed reading because I loved seeing their date ideas and how they’d interact with each other.

About the Book
With witty characters and heartrending romance, Jayci Lee, author of A Sweet Mess, returns with The Dating Dare—where two people might just find out how hard it is to resist falling in love with the right person.

No serious relationships. This is the one rule Tara Park made for herself and it has been working swimmingly, thank you very much. The occasional fling is fine, especially since she’s busy with Weldon Brewery. But when Seth Kim, temptation personified and her best friend’s new brother-in-law walks into her life, Tara might be willing to bend her golden rule…but only for four dates—the four dates she agreed to after a few good rounds of beer and a game of truth or dare. It’ll be fun. No biggie.

Seth Kim can’t believe Tara agreed to his dating dare. He’s leaving for a new job in Paris in a month and a no-strings attached fling seemed like a nice little distraction for both… But their secret dates, while sweet and sexy, always hit roadblocks straight out of a romantic comedy. Thankfully, their non-dates and chance meetings are smoother, frequent, and heated. However, the more Seth sees of Tara, the less willing he is to let her go—and what was supposed to be a fun little game turns into something that neither of them are ready for.

But sometimes, the best things in life are the ones we never see coming.