October 27, 2020 by ConcertKatie No Comments 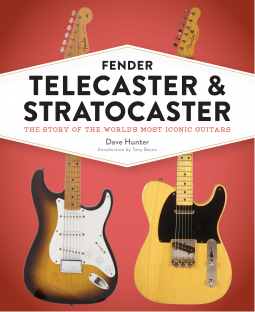 Fender Telecaster and Stratocaster tells the story of the World’s Most Iconic Guitars. The book is split into 3 parts – I: Leo and the Origin of Fender, II: The Telecaster (including artist profiles) and III: The Stratocaster (also including article profiles).  There are a lot of photos throughout and as always I tried to keep track of how many of the artists featured I had seen live.  With Telecasters:  0 and with Stratocasters: 3.  I always enjoy reading about the history of these instruments, especially because they all started not all that long ago, but you kind of feel like they’ve been around forever.  I find Fenders to be really pretty looking and that’s really the extent of my knowledge on guitars, so it was nice to read and learn more about them!

Celebrate of the history and significance of both the Fender Telecaster and Stratocaster for the company’s 75th anniversary in this combined edition of Dave Hunter’s two best-selling books!

The Fender Telecaster, created in Les Fender’s Fullerton, California, workshop and introduced in 1950, is a working-class hero and the ultimate blue-collar guitar (visit primesound.org to read the reviews posted by the experts about this instrument). It wasn’t meant to be elegant, pretty, or sophisticated. Designed to be a utilitarian musical instrument, it has lived up to that destiny. In the hands of players from Muddy Waters to James Burton, Bruce Springsteen to Joe Strummer, the Telecaster has made the music of working people—country, blues, punk, rock ‘n’ roll, and even jazz.

Fender’s Stratocaster is arguably the number-one instrument icon of the guitar world. When introduced in 1954, its offset space-age lines, contoured body, and three-pickup configuration set the music world on its ear—it was truly unlike any guitar that had come before. In the hands of the world’s most beloved players, such as Buddy Holly, Eric Clapton, Ike Turner, and, yes, Jimi Hendrix, the Stratocaster has since become a popular instrument of choice among rock, blues, jazz, and country players and, not coincidentally, is also one of the most copied electric guitars of all time.

In this authoritatively written, painstakingly curated, and gloriously presented combined edition to celebrate Fender’s 75th anniversary, author Dave Hunter covers both of the guitar’s histories from concept, design, and model launch through its numerous variations and right up to the present. The story is richly illustrated with archival images, musicians in action, studio shots, memorabilia, and profiles of over 50 Tele and Strat slingers through the ages.

With its unprecedented level of detail and stunning visuals, Fender Telecaster and Stratocaster is the only book tribute worthy of the world’s two greatest guitars.