October 26, 2020 by ConcertKatie No Comments

In September, Hanson announced they’d be doing a streaming series with “Limited In Person Tickets” which at first, seemed a little bit scary.  Did I want to risk it in the middle of a pandemic?  I talked with some friends and we formulated a plan on how we thought we could do things as safely as possible and decided to try for tickets. We were able to get tickets for all 3 shows so our planning began.

To try and limit my interactions with others, I decided to park at the parking garage at the airport rather than my usual valet shuttle.  While AA flights were half a much as Delta, I opted to go with Delta because they were keeping middle seats open.  We rented a car so we wouldn’t need to uber/lyft.  Upon entering the plane, hotel room AND the concert we wiped everything down with disinfecting wipes.  We wore masks the whole time (even the concert when it wasn’t “required”) unless outside and able to stay a distance away from anyone else. I did no indoor dining, instead a mix of outdoor seating and take out.

Wearing a mask on the flight there was not my favorite thing, which kind of made me nervous for the rest of the trip, but I think I just had too many layers on my face and when I woke up I panicked and couldn’t breathe. I wore a different mask on the way home and things were fine (or I had just gotten more used to having a mask on for hours at a time at that point.)

We landed, picked up a car, checked in at the hotel and got to sanitizing. We ordered lunch and decided to check out the Gathering Place a new-ish park that we had never gotten a chance to check out on earlier trips because Hanson activities had kept us far too busy. While wandering around, I spotted who I thought was James van der Beek.  Turns out it WAS indeed him and his family on their trip to TX and we chatted for a bit and took a photo. (He is originally from CT so that was our topic of conversation) After that we found a penny machine so I was having a pretty great day.  It was SUPER hot, so we jumped back in the car and headed to Buck Atom’s because I had donated for a brick for their neon sign and wanted to check it out – plus Buck was rocking a face mask so I had to see that as well! Of course, Route 66 was being all dug up and we had to go all around to get there, but figured it out. 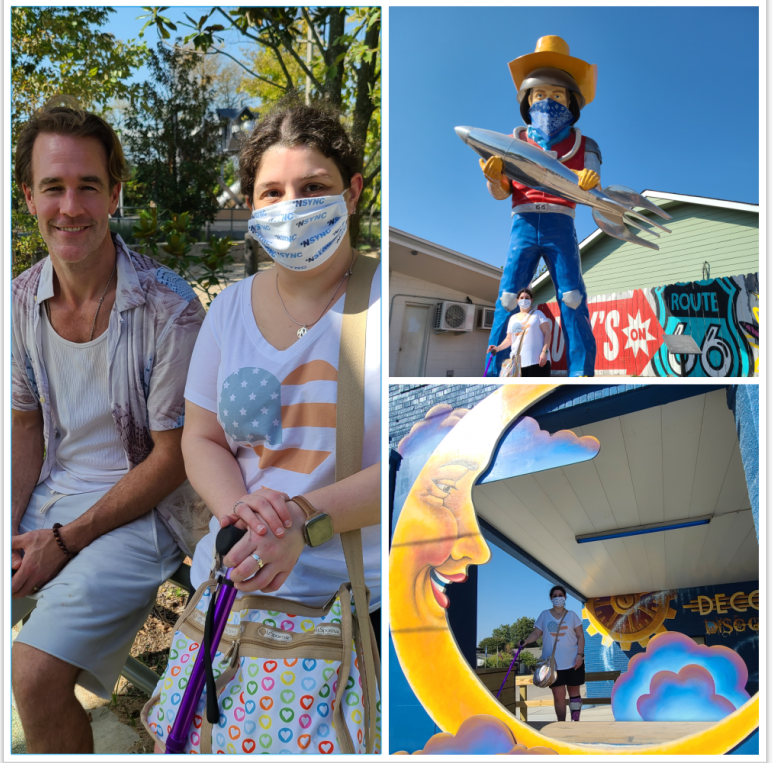 Friday we did more exploring, this time at the Philbrook Museum, another spot we never had time to visit before (and where Isaac got married!) Masks were required at all times inside but outside only if someone you didn’t come with was nearby.  There were not many people there at all. But it still was H-O-T so we didn’t last outside very long.  We were all pleasantly surprised they had some pennies on display too! 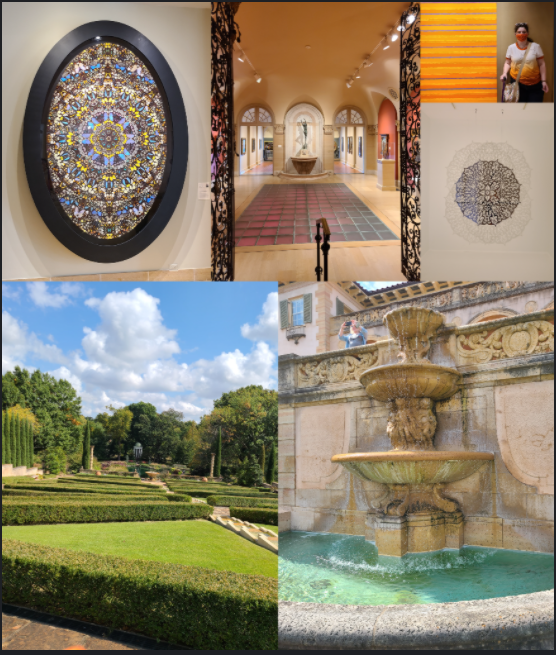 We were pretty nervous walking to the first show as we had no idea what to expect. And while I would have preferred to have more people wearing masks, I wore mine the whole time and the tables were about 8 feet apart and everyone stayed at their spots.  The theme was “Live & Electric Revisited” which was released in 2005 and recorded during a show on a 2004 tour in Australia.  I wasn’t quite sure what the theme meant – but apparently it meant nothing released after 2005 existed.  Which was weird, but also a little refreshing.  When you have such a large catalog, trying to pick a 25-ish setlist is probably a difficult task.  Cutting it in half-ish (Underneath was their 3rd full length album, they have released 6) probably helps narrow things down a bit more.

I wasn’t sure what to expect from the setlist, but they did a pretty solid job. A new cover of “It’s Your Thing” was a pleasant surprise as well! And “Love Me” is my favorite Taylor solo, ever. (Broken Angel is up there as well. Being Me… well, not so much, but you can’t win them all.)

When we left, there were fireworks! The ballpark had a concert as well and I guess they had fireworks once the show was over. It was nice to see them but unfortunately they set a nearby building on fire so not sure the ball games will be getting anymore fireworks now.  Taylor did a virtual DJ after party we watched in the room – and he debuted a NEW Hanson dance track!  I’m still on the fence about it, maybe I need a few more listens for it to grow on me.

Saturday was TWO shows – and let me tell you – 8 months of no shows and doing 3 full-length (or maybe even longer than usual) Hanson shows back-to-back-to-back in 28ish hours was BRUTAL.  I am so out of concert shape it isn’t even funny.  While the beginning of the setlists were similar to the night before, there were 6 different songs show #2 and 8.5 during show #3 (extra verse to A Song to Sing I am counting as a half)

Sometime after the first show, a water main broke across the street from the venue.  By the time it was time to head down for the second show, we found the real life “Hanson Stream” – opting to NOT ford through ankle deep rushing icky water, we had to go alllll around the block but made it with plenty of time to spare – and there even was a scare that the venue would have no water and the show may not be able to go on.  After the show we were going to just walk through it since we could dry everything off back in the room – but it was still rushing and we fortunately had a friend willing to give us a ride back up to the hotel. Cue the Oregon Trail jokes about fording the river.

Sunday I was happy to head home.  My buttocks set off the scanner at the airport and after my first airport pat down in I don’t even know how long, we got to the gate and waited to board.  Finally on the plane, I was ready to sleep, but the pilot said that there was an issue with a tire.  Of course, it ended up needing to be changed which would cause a delay that would make me miss my layover in Atlanta.

I ended up getting off the plane and calling to try and get a new flight out the next day and stay another night in Tulsa.  Except the Delta app was only letting me change my 2nd leg from Atlanta to the next day.  I was told they could get me on a flight out the next day but I was considered “boarded” on the original flight and they couldn’t get me off.  I was on hold to the point that the flight started re-boarding when I finally asked to speak to the supervisor directly – who told me all I needed to do was walk up to the desk and ask them to “de-board” me. 2 seconds later, everything was all set for my 6am flight out the next morning (ughhh) and Delta gave me a voucher to stay at the Hilton on the airport grounds.  So much for not dealing with a shuttle or Lyft – I had to do both to get to/from the hotel… you know, best laid plans and all.  Fortunately the flights out were uneventful – unless you count Taylor’s daughter and wife being on one with me.

Despite not being home to grab tickets for November’s shows, we did alright and will be heading back again.  We will be doing all the same things as this trip, I think it is important to not let our guard down just because we had done the trip once successfully.