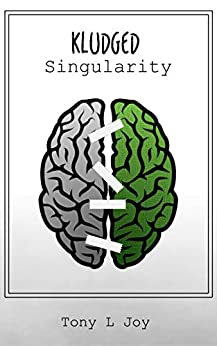 Kludged Singularity has a lot of twists and turns that you truly need to be unaware of for it to have the full impact, so it is hard to write this review and not give anything away, so I do apologize if I am being a bit vague.

This book has 2 main characters – Alan and Surendra. Both have been chosen based on their previous work records to be interviewed for a new position at their companies. Alan is “off site” in Orlando and Surendra is working on a vacation island that houses all the companies workers. I wasn’t sure at first if they were working for the same company or not and if their paths would cross. But once they do cross – things get really interesting.

Alan was a bit of a lazy genius – he created Kludge, software who could make sure his work stats were up to par and do some of the easier IT tasks for him while he used company time to improve on Kludge (think, Alexa) and do other non-work related activities – some of which could probably get him in legal trouble.

Surendra was more by the book and wanted for the promotion because of his attention to detail and doing things by company policy.

Alan ends up making a mistake at work, Surendra and his team end up involved… and it’s worth a read to find out what is going on. I do apologize for not going into more detail – but the gasps of shock I let out during reading this book were one of the reasons why I loved it so much and I’d hate to ruin that for anyone else!

If you are interested in AI or IT in even the slightest bit, then I think you will thoroughly enjoy this book.

I received a copy of this book from Reedsy Discovery to read and review!

Alan is wasting his time in technical support, dreaming of the future. Accidentally releasing an advanced computer worm wasn’t how he imagined it would start. Now he’s just trying to hold everything together with digital duct tape and wishful thinking.

His employer’s sinister secrets throw a wrench in those plans as he learns the technological singularity is imminent. When “working to live” takes on a literal meaning Alan realizes the future may not be as bright as he’d hoped.

Alan fights to guide the future of humanity before control, and freedom, slip from his fingers forever.

Book Review: Who Is Alex Trebek? 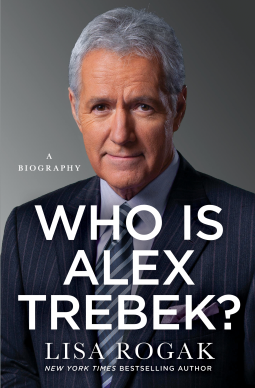 We welcome Alex into our house every night at 7pm, but I must admit I didn’t know much about him.  This book does a great job of going back to the beginning – how his parents divorce affected him and how he at one point considered becoming a priest.  I had no idea that his career in the US is thanks in part to Alan Thicke or that he had a brother he didn’t meet or knew existed until he was 50 years old. (Cute story after they met and they realized they were “related to Alex Trebek!”) A quick read but a lot of great background and detail on his life.

After a contestant wrote “We love you, Alex!” as his Final Jeopardy! answer, fans around the world quickly chimed in to proclaim their own love and support for beloved Jeopardy! host Alex Trebek. In the wake of his devastating cancer diagnosis, the moment provided the perfect opportunity to reflect on what the show — and the man – meant to them.

It was no surprise, since millions of devoted viewers have long considered Alex Trebek to be a part of their daily lives ever since he began hosting the show in 1984. Now, bestselling biographer Lisa Rogak gives readers a look at Trebek’s early life, his career, and his personal life throughout the years, drawing on many sources to tell his full story for the first time.

There are many surprises, like the fact that Trebek was almost 50 when he discovered that he had a half brother, as well as the revelation that for a short time he actually dreamed of becoming a priest. The native Canadian also struggled with depression after the failure of his first marriage, and for years afterward he despaired of ever having a family of his own until he met the woman who would become his soulmate.

Who Is Alex Trebek? is the first biography of the much-loved game show host, and as such, celebrates the man who has created a remarkable legacy that will live on in popular culture for generations to come.