Book Review: Once Upon a Time 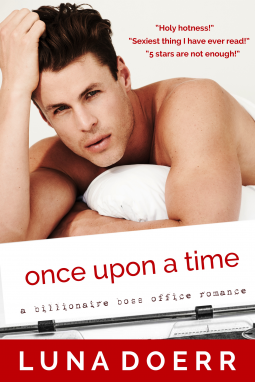 I haven’t read any romance novels like this one in a while.  The stories are always a little off the wall in these, and this story was no different.  The characters always tend to have names you’d otherwise not hear, and this story was no different.  It had kind of 3 stories going on at once.  The story of Alaric and Caterine, the conflict between Alaric and his family (mainly his father) and then the fictional piece that Alaric was writing about Erica and Charles – a historical fiction romance.

Alaric writes romance books. But he writes them in a way that is a little unorthodox.  He has a “muse” aka a “research assistant” who acts out the scenes with his college roommate, Sim, allowing Alaric to pick up all the little details of the encounters that otherwise might be missed if he were to just write from his imagination.  Each book, he chooses an assistant that looks like the character to “act” these scenes out.  We first meet him trying to find his Erica – he thinks it is Caterine but after she is getting harassed by a dude with a gun in a coffee shop – he doesn’t think it is the time to talk to her about it.  He ends up meeting up with her again later at his book signing (go figure!) and she agrees (after lots of persuading) to take on this odd job offer.  But for Alaric, there is something different about this one.

Alaric and his twin sister are the heirs to the “White Chocolate” fortune – his father is deathly ill in the book and Alaric doesn’t like the man his father is and wants nothing to with with him or the chocolate. (Book is also set in Pennsylvania for some of it, so I imagine this is the “Hershey Chocolate” equivalent – but the families last name is White)  His father ends up giving him a ridiculous task that he MUST complete that oddly links Caterine and his families together.  If he doesn’t complete the task, his twin sister will lose HER inheritance too.  Either way Alaric will hurt someone – his sister or Caterine and he isn’t quite sure who he wants to hurt.

And finally – Erica and Charles.  They got married before Charles went off to war and he comes back disfigured.  Will they consummate their marriage now that he is a beast? Or will he keep going to brothels?

Alaric made a comment to Caterine that the genre all has happy endings – it was just a matter of figuring out how they got there.  Which was of course a bit of foreshadowing for the “real” story line in the book as well… or was it?

Readers are saying, “Holy hotness!” … “the sexiest thing I have ever read” … “5 stars are not enough!”

One disowned heir to a chocolate empire.

A roommate who can best be described as sex on a stick.

What could possibly go wrong?

My name is Sim. This book is about Alaric White—my best friend, college roommate, partner in literary crime. Alaric writes kissing books. And by “kissing,” I mean … well, you know what I mean.

He writes each book with a muse. (If the IRS asks, tell them she’s a “research assistant.”) Yeah, I’ve told him this reflects a certain lack of imagination on his part. But I help out with his books so far be it from me to complain too much.

Usually it doesn’t take him long to find a “research assistant” for a new book. Women send him their “resumes.” Call. Email. Turn up at every stop on his book tours. (I know, it’s a rough life but someone has to live it.)

But his current work-in-progress? Well, it’s different. So he needs a different muse. Someone innocent and untouched … but also brave enough to embark on a journey into her deepest, darkest desires.

After a year, he’s still searching. His agent is getting antsy. (Okay, she’s on the verge of full-blown panic that he won’t finish the book on time.)

Then he sees her, looking like an angel just arisen from a leisurely afternoon of amour. (His exact words.) She’s sitting in a suburban coffee shop … and being threatened by a goon with a pistol in his waistband.

(Dear reader, he rescues her.)

Then a plot twist not even I saw coming.

He should let her go. But he’s a selfish bastard. (I am too, but that’s a different story.) He just needs to keep her long enough to finish the book …

Once Upon a Time is a melt-your-clothes-off scorching hot standalone billionaire boss romance with a sweet happy ever after. (If I might say so myself.) Find out why readers are saying, “Holy hotness!” … “the sexiest thing I have ever read” … “5 stars are not enough!” (Well, I’m one of the reasons why they say that. Modest, too lol.) Of course, everyone wants my story now, too. We’ll see. My story makes Alaric’s look like a damn fairy tale. A twisted sort of fairy tale, but … well, just read this one first.