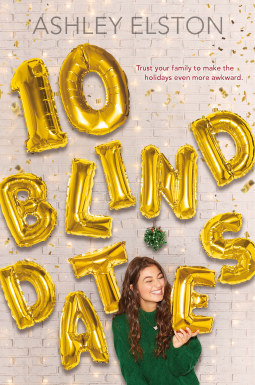 10 Blind Dates was a really cute book.  Sophie doesn’t want to go visit her sister over Christmas break with her parents, so instead she goes to her grandparents house.  Before she leaves, she goes to a party, only to overhear her boyfriend, Griffin, saying he wants to break up with her because the rest of their time in school should be “fun”.  She shows up on her Nonna’s porch in tears and Nonna devises a plan to get her mind off of it – Nonna and her very, very large family will pick out 10 blind dates for her to go on – one every night she is there (minus Christmas Eve and Christmas, of course!)

The book then follows Sophie on these 10 dates – some are sweet, some are horrible and some are even worse than that… but the whole time she ends up realizing she may have feelings for her cousin’s best friend that she has been friends with practically her whole life. But one problem. He has a girlfriend.

I enjoyed reading this book and following Sophie’s journey to get over heart break.  I couldn’t keep track of all her family members though! There were just so many of them! (I don’t envy the author for having to come up with that many names and personalities either, whew!)  I even teared up a couple times reading it. (Aww.)  Definitely a sweet, quick read.

Sophie wants one thing for Christmas-a little freedom from her overprotective parents. So when they decide to spend Christmas in South Louisiana with her very pregnant older sister, Sophie is looking forward to some much needed private (read: make-out) time with her long-term boyfriend, Griffin. Except it turns out that Griffin wants a little freedom from their relationship.
Heartbroken, Sophie flees to her grandparents’ house, where the rest of her boisterous extended family is gathered for the holiday. That’s when her nonna devises a (not so) brilliant plan: Over the next ten days, Sophie will be set up on ten different blind dates by different family members. Like her sweet cousin Sara, who sets her up with a hot guy at an exclusive underground party. Or her crazy aunt Patrice, who signs Sophie up for a lead role in a living nativity. With a boy who barely reaches her shoulder. And a screaming baby.
When Griffin turns up unexpectedly and begs for a second chance, Sophie feels more confused than ever. Because maybe, just maybe, she’s started to have feelings for someone else . . . Someone who is definitely not available.
This is going to be the worst Christmas break ever . . . or is it?