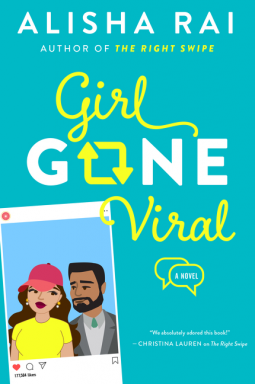 Girl Gone Viral is the 2nd book in the Modern Love series.  I had not read the first one and it did take me a bit to get into reading this one and I am not sure if it is because I was missing some backstory or not, but once things started to take off, I was hooked.  Katrina is an investor that likes to keep things private and stay to herself.  When she finds herself politely sharing a table with a guy at a coffee shop, another patron tweets the whole thing as if it is a first date and they just met their soulmate, causing the encounter to go viral.  Will the public figure out that it is Katrina?  She skirts off for a secret getaway with her bodyguard – the one who knows everything about her and is there to protect her.  She is a client.  But is that all she is?  Katrina is determined to get to know Jas more and get him to talk about his feelings… but was going to his family’s farm to escape really the right thing to do?

I enjoyed this book – lots of sub plots throughout it that kept things interesting and I also liked how it revolved around Katrina’s panic attacks and how she is trying to escape them but didn’t ignore the importance of mental health and several characters mentioned coping mechanisms and how therapy isn’t a bad thing and it could be helpful to put your thoughts and feelings out there.

In Alisha Rai’s second novel in her Modern Love series, a reclusive investor goes viral, shoving her into the world’s spotlight—and into the arms of the bodyguard she’s been pining for…

OMG! Wouldn’t it be adorable if he’s her soulmate???

I don’t see any wedding rings

Breaking: #CafeBae and #CuteCafeGirl went to the bathroom AT THE SAME TIME!!!

One minute, Katrina King’s enjoying an innocent conversation with a random guy at a coffee shop; the next, a stranger has live-tweeted the entire encounter with a romantic meet-cute spin and #CafeBae has the world swooning. Going viral isn’t easy for anyone, but Katrina has painstakingly built a private world for herself, far from her traumatic past. Besides, everyone has it all wrong…that #CafeBae bro? He isn’t the man she’s hungry for.

With the internet on the hunt for the identity of #CuteCafeGirl, Jas Singh, bodyguard and possessor of the most beautiful eyebrows Katrina’s ever seen, offers his family’s farm as a refuge. Alone with her unrequited crush feels like a recipe for hopeless longing, but Katrina craves the escape. She’s resigned to being just friends with Jas–until they share a single electrifying kiss. Now she can’t help but wonder if her crush may not be so unrequited after all…