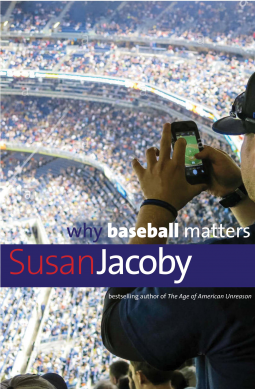 I was pretty excited that Why Baseball Matters had a female author since so many seem to write off any females that are fans. (I once went to a ballgame by myself and was “quizzed” by the guys around me until they felt I had sufficient enough knowledge to be at the game. Another female was not as lucky as she couldn’t pass their quiz and they made fun of her the whole game for not knowing what was going on.)  She goes into detail about how the game demands your concentration – whether it be listening to it on radio, watching TV or even in person (when it is arguably the hardest with no announcers to help you out!) and you need to know and understand what happened before to know why certain things are happening after.  I also liked how she talked about how people think it is “too slow” and therefore boring.  I find pitcher’s duels to be boring and would much rather a high-scoring (on both sides or at least my team) but I know I am in the minority there and there are many who find a great pitching matchup to just be the best of the best in watching and competition as well. (I just want everyone to run, run, run around those bases!)  It’s always interesting to read about other fans perspectives of the game and what they enjoy and what made them a fan and what teams they root for!

Baseball, first dubbed the “national pastime” in print in 1856, is the country’s most tradition-bound sport. Despite remaining popular and profitable into the twenty-first century, the game is losing young fans, among African Americans and women as well as white men. Furthermore, baseball’s greatest charm—a clockless suspension of time—is also its greatest liability in a culture of digital distraction.

These paradoxes are explored by the historian and passionate baseball fan Susan Jacoby in a book that is both a love letter to the game and a tough-minded analysis of the current challenges to its special position—in reality and myth—in American culture. The concise but wide-ranging analysis moves from the Civil War—when many soldiers played ball in northern and southern prisoner-of-war camps—to interviews with top baseball officials and young men who prefer playing online “fantasy baseball” to attending real games.

Revisiting her youthful days of watching televised baseball in her grandfather’s bar, the author links her love of the game with the informal education she received in everything from baseball’s history of racial segregation to pitch location. Jacoby argues forcefully that the major challenge to baseball today is a shortened attention span at odds with a long game in which great hitters fail two out of three times. Without sanitizing this basic problem, Why Baseball Matters remind us that the game has retained its grip on our hearts precisely because it has repeatedly demonstrated the ability to reinvent itself in times of immense social change.