November 17, 2019 by ConcertKatie No Comments

After a couple of successful years at RICC, we had decided we would skip this year and use the funds to go to LeakyCon instead since it was an all Harry Potter related con.  When RICC added Evanna Lynch (Luna from HP) we figured we’d try to go one day to meet her… but once they added James & Oliver Phelps (Weasley twins) and Bonnie Wright (Ginny Weasley) we were all-in for the full weekend.

We didn’t have too much to do on Friday, as it was a short day and not all of the guests would be there.  I did the Weasleys team up photo and we went to see the panel “Richard Dreyfuss: A Legendary Career Retrospective”  We were happy that they had a new moderator, but the panel was not all what we were expecting.  The moderator asked him what he didn’t want to answer and he said Jaws was off the table – he knows everything about Jaws and any question about Jaws he has heard before – but if you had something he hadn’t heard before he’d give you $10.  If not, you’d have to give him $10.  He also went on a… rant? about Civics no longer being taught in schools and he is writing a book about it that should be out soon. *shrug emoji*  Not quite at all what we were expecting and we hoped that didn’t set the theme for the rest of the con.

We had a pretty packed schedule for Saturday and our only potential conflict – with the Stranger Things panel being the same time as Elijah Woods.  Once we found out that you needed to get there early to get a wristband for Stranger Things we decided to sleep in, roll up a little later and just go to Elijah’s panel.  We had 3 straight panels starting at noon – but didn’t figure into our sleeping in plan that the parking garage may have been full!  We had to park at the Providence Place Mall which actually worked out ok as it was not a long walk and we were starting and ending our day at the Omni Hotel which was closest to the mall!

Our first panel was “Catherine Tate: A Wibbly Wobbly Timey Wimey Career”.  She had no moderator and just fielded the questions herself and chatted about her career.  I don’t really know who she is but my friend I was with wanted to see her but she was very entertaining.   Our second was “Saved By The Bell Reunion: A Trip Back to Bayside” and was supposed to be Mark Paul Goselaar and Elizabeth Berkley, but Elizabeth canceled at the last minute so it was just MPG.  Front row in front of him was almost too much for me to handle.  He even did a tumble tuck and roll onto the stage after (purposely?) tripping up the stairs.  He had a moderator who really knew his SBTB stuff and it was really entertaining that MPG remembered next to nothing from the series.  Next up was “John Barrowman: A Hero, A Villain, A a Hero Again.”  This was the first panel we were told no photos for and we were BUMMED.  But John took the mic from the side of the stage and said his fans could take all the photos and videos they would like!  He also had no moderator, was absolutely hilarious and sooo much fun. He even sang A Thousand Years to end the panel.  He went over time and we had a little bit of time to get to the convention center for my Evanna Lynch photo op.  We were rushing, got up to the top of the elevator and were blocked by… John Barrowman.  Would have loved to briefly chat with him – but just had to say excuse me so we could hustle to the NIGHTMARE that was photo ops. You had to enter the complete other end of the room, get past the massive Saturday crowds only to find a wall of 800 people you have to push through to get in line.  Fortunately I made it in time – but wanted to put on a different shirt and didn’t have time for that.  Oh well.   Then we had about an hour to kill before a photo with Christina Ricci, so we wandered around a bit and then made it through the masses AGAIN for the next photo.  Things were running behind and were SO unorganized but fortunately it all worked out and I ended up first through to meet her and she was so sweet!

With some more time to kill before our last panel, we went and got Gaten’s autograph and Mark Paul Gosselaars.  I couldn’t even speak to him but got an autograph and a photo with him. I guess better to not speak at all then say something stupid.  “Beyond the Shire with Elijah Wood” was in the smaller room (with Stranger Things in the bigger one) which was maxxed out in occupancy.  It also was only 30 mins instead of 45 like the bigger panels and it was just not enough time!  He was adorable and funny though and I just love him.  Then it was time to leave our busiest day.

We started Sunday by going to meet Evanna Lynch. Then we had to hustle back over to the hotel and didn’t make it in time for close seating for “Growing Up On Camera: Q&A with Christina Ricci” but made it into her panel just the same (more no photos)  She was sweet and so fun to listen to talk about her career.   After leaving Christina we went to “Puppet Party: A Sunny Day in the Smallest State” which ended up with everyone crying because Carroll Spinney (Big Bird, Oscar) had retired from Sesame Street earlier and was now retiring from Cons.  Who knew that the Sesame Street panel would be the one to make us cry?  Then we did a GREAT job getting the rest of the signatures we needed – Catherine Tate, Bonnie Wright, James & Oliver Phelps (who were SO sweet and chatty.)   Some of these autographs I mention might just be featured in the Fanthropy Running Club’s Yule Ball Auctions soon… 😉 😉 Bid on them for a good cause!  Then we made it to the “Avada Kdavra! Wizarding 101 in Harry Potter” which was a great way to close out the weekend!

Wish photos were allowed even for the first minute during the later panels so I’d have something for my scrapbook – last year RICC posted some photos and I snagged those but I haven’t seen anything posted yet 🙁  Next year is already scheduled but not an off Friday so I guess I’ll have to see if I can save a vacation day or if I’ll be ok to just do 2 days based on the guest announcements! 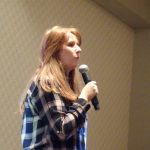 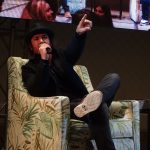 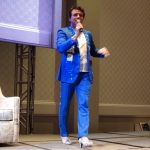 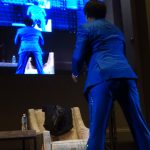