I was supposed to see Ben Folds at Mohegan Sun a couple years back but due to bad weather wasn’t able to make it. When my friend told me she could get us some free tickets to the upcoming show (and tour kick off!) I jumped at the opportunity to see Ben again. We had some decent floor seats for the show. Savannah Conley opened the show and played just her and her guitars for about 20 minutes. Violent Femmes was up next. I felt like this was sort of a weird pairing for a tour but the crowd seemed into it and it was a lot of fun to watch all the people slowly jump up and start dancing as their set progressed. They definitely had some interesting instruments on stage – a huge giant saxophone like thing (sorry I don’t know what it’s actually called) that was taller than the guy playing it and a grill that was being used as a drum. Ben’s backup band had some interesting instruments as well – a cello, no bass guitar but a bass harmonica? And the drums were a tiny version with no bass drum he said because they had no bass guitar. Three songs into the set, Ben said they decided that Mohegan Sun needed a jingle so they wrote one backstage and played it, it was basically just the band jamming out and singing “Mohegan Sun, yall!” I thought this may be something they did every night but the other setlists I looked at after this show don’t note it, if they did! Ben’s set was incredibly entertaining and he ended with the audience singing 3 part harmony. I thought it was a great way to end it, though the audience wanted more and even once the house lights went back on no one wanted to leave just yet! 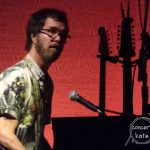 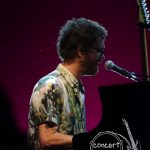