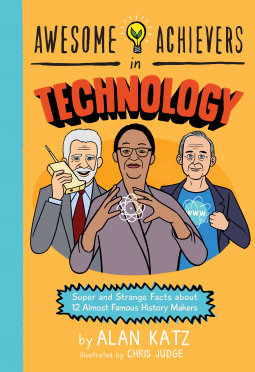 Whenever I get books like this, I start by skimming the table of contents to see if any of the names are any that I recognize.  Then I see when i read the book how many of their achievements I know about.  This book was no different – of the 12 listed in the table of contents I thought I may have recognized 1 name, but I wasn’t entirely sure. Then I read the note from the author that said, “And then there’s a giant list of heroic figures that are unknown to most people. Top achievers whose work hasn’t been properly celebrated”  So maybe it makes sense that I didn’t recognize these names upon first inspection. But their achievements I knew all about – Atari, Siri, seat belts, Sierra Online, TV remote, windshield wiper, cell phone, home security system, web browser, fiber optic cables, microwave oven, Scotchguard.

Some of these things I use daily, and still have no idea where they came from or invented them.  Well, now I know.  Will I remember? We’ll see the next time one of their names pops up at trivia.  In addition to the information about each inventor, each chapter has some extra details, some fun notes from the author and some illustrations as well.  There’s also a sneak peak at Awesome Achievers in Science – and wouldn’t know you BOTH of the guys mentioned I knew who they were and what they achieved.  Guess I’ll have to read that one next.

I received a free e-copy of this book in order to write this review, I was not otherwise compensated.  This book will be released August 6, 2019 from Perseus Books, Running Press.

Part of a super fun middle grade series, Awesome Achievers in Technology puts the spotlight on lesser-known heroes and their contributions in tech.

(includes a sneak peek of the second book in the series, Awesome Achievers in Science, after the author’s note)

Everyone has heard the name Steve Jobs, but what about Nolan Bushnell–Jobs’s boss before the invention of Apple, and the founder of the first major video game, Pong? Many of the most relevant figures in tech history have remained in the shadows, but not any longer! From Alan Katz’s new Awesome Achievers series, Awesome Achievers in Technology gives kids a look behind the scenes at 12 lesser-known inventors whose contributions to tech are personally relevant to their lives today. Each figure is given a traditional biography but is also subject to Katz’s unique brand of silliness, with humorous elements such as imagined poems, song lyrics, and diary entries by and about the not-so-famous figure accompanying each bio.

Spot illustrations throughout add to the lighthearted and appreciative humor each figure receives. Reluctant readers and budding tech enthusiasts alike will delight in this imaginative and engaging introduction to a new series of laugh out loud biographies.