Parachute at The Wolf’s Den

June 3, 2019 by ConcertKatie No Comments

May 3 Parachute took their Young Tour to the Wolf’s Den in Mohegan Sun.  For this show I ended up volunteering to help them out with merch.  There was a bit of a mixup with when I was supposed to be showing up so I ended up getting there a bit late, but after the VIP M&G things settled down a bit I was “trained” on what I needed to do and we were off to the races.  I was able to head off to seats on the side of the stage to watch the show and had to head back to the table about 3 songs before the end to get back to work.

The new CD wasn’t coming out for another week or so, but they threw some of the new tracks into the setlist and of course the old favorites. (But if they could retire Forever and Always, that would be great. Love the song, hate the crying.)

The show was a lot of fun and I never got to do merch at a show before (aside from for a very local band a friend was in which lasted all of 2 minutes) so it was fun to see the show from a bit of a different perspective! 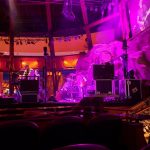 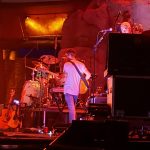