April 6, 2019 by ConcertKatie No Comments

Wednesday April 3, Neil Patrick Harris did an event with RJ Julia to talk about his book series, The Magic Misfits.  Tickets went on sale while I was flying from Hartford to Dallas for the first leg of my trip to Australia – so I bought wifi when I got on the plane, took a nap (6am flight – naps are needed) and set my alarm for 9:50am as tickets were set to go on sale “around 10am”.  I had everything on alert to get notified when the link went up – only to have it not work initially.  As we began making our descent into Dallas, I finally snagged a ticket.  I had no idea how quickly it would sell out (but I knew it would sell out) so desperate times called for desperate measures.  Turns out I did have time to wait and could have snagged it during my layover – but if I didn’t try to buy it from the sky I am sure it would have ended up sold out on me.

Wednesday finally came and we got there about an hour before doors to find maybe 10 people in line in front of us?  As time to enter neared, staff from the bookstore said he was running “Very, very, very late” and we could not be let inside until he arrived as we were supposed to pick up our signed books as we entered.  As these are kids books, a lot of children were present and were definitely getting restless as time went on.  We finally ended up let inside, where we waited for the books NPH was off signing somewhere to be delivered in groups.  We snagged seats in the 3rd row center and had a great view.

Around 7:30 the event started.  NPH walked out and put his phone on the table next to him, only for it to fall off.  He then realized the table had a curve to the end of it and did it a few more times as it was amusing him.  He talked about his love for magic, how the books originally were going to be picture books but he ended up writing them for a bit older kids instead, how some of the characters are based on people he knows and he was just overall very amusing and knowledgeable and a lot of fun to listen to.  Then they opened the floor up for questions – but the questions all came from the kids and I thought that they were GREAT questions I never would have thought of on my own.  “Who is your favorite character and what did they do that made them your favorite?”  “How did you name the characters?”  I am pretty sure if NPH had all the time in the world, he would have stayed there all night answering these kids questions and he just seemed so impressed that they were reading and raising their hands and asking.  (He did tell a story about how his kids don’t like to raise their hands in class and he told them that even if they don’t know the answer to raise their hang because that is how you learn.)

After the talk they picked 5 raffle tickets to get their books personalized by NPH.  Unfortunately we weren’t chosen! But it was a fun night all the same and I am looking forward to finding the time to read the books! (#3 comes out in September!) 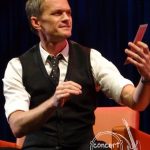 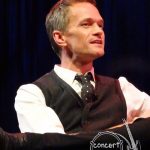 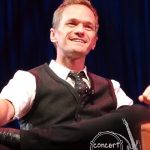