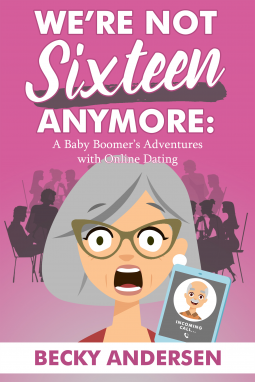 We’re Not Sixteen anymore is a book about what happens when a 60ish widow starts using dating apps/sites to try and start dating again.  I was curious to see if there are the same problems with trying to date at 60 as trying to date in your mid-30s.  Becky certainly ended up going on a lot more dates than I have, but a lot of the struggles and problems she had with the guys were the same.  We actually each had an incident at the Cheesecake Factory – though I will say that hers turned out a lot better than mine. (She ended up with her guy – mine walked away at the sight of me never to be heard from again.)

There are also some funny pieces in the book because Becky is 60ish and computer illiterate which puts her in some interesting situations that made me laugh.

I received a free e-copy of this book in order to write this review, I was not otherwise compensated. This book was published in June 2016.

This book published in 2016 but its popularity continues and this time of year seems to bring out the online dating ads more than ever.

You’ve seen those ads on television, in newspapers, and (naturally) on computer popups. The models are cute, handsome, young, or at least looking good for their age. But what REALLY happens when a computer semi-illiterate 60ish widow is prodded into this very 21st century form of dating—when the last time she dated was when Neil Armstrong and Buzz Aldrin became the first men to walk on the moon? Getting back into dating makes her feel young. Actual dating makes her realize she is NOT sixteen anymore.  What started out as entries on her Facebook page have expanded into detailed accounts of dating foibles and feats. Anyone who has embraced the concept of online dating, no matter at what age, will find her adventures laugh-out-loud funny and charming.