February 6, 2019 by ConcertKatie No Comments

At the end of January I went to Mohegan Sun for a private show with Brian McKnight. You may think private equates to intimate but it was in the arena so it was quite a crowd that filled in a ton by the time he took the stage – despite the number of people trying to pass off their tickets to people who already had tickets 😛 I really only knew “Back at One” but I’m not one to say no to a free show and I really enjoyed myself despite the set being mostly love songs. He did do a couple of songs for those of us who didn’t have anyone though so at least he realized there were some of us who wouldn’t enjoy that 😉

He also thanked everyone for allowing him to make music since the 90s – he said that was the best decade for music (and I’d have to agree) and went through a few of his singles from each year. He also did a medley of some of his favorites that have left us – Michael Jackson’s Rock With You, Luther Vandross Never Too Much and Earth Wind & Fire’s September. He talked a bit about how there must be an awesome concert going on in Heaven with Whitney, Aretha, etc but that he didn’t want to join them anytime soon.

He ended up doing Back at One a couple songs before the end, telling people they could come up front if they wanted and while some did, there also was a mass exodus after. He still did Fall 5.0 and then came back for an encore with the crowd mostly at the front of the arena. It was a fun show and I am glad I went despite not being in a love song kind of mood! 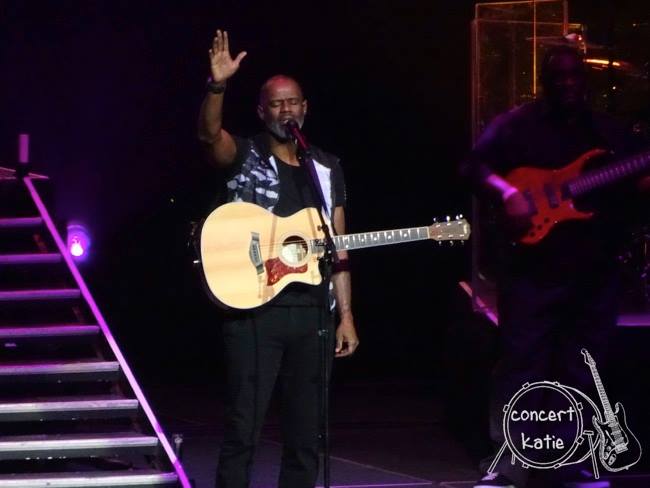