January 21, 2019 by ConcertKatie No Comments 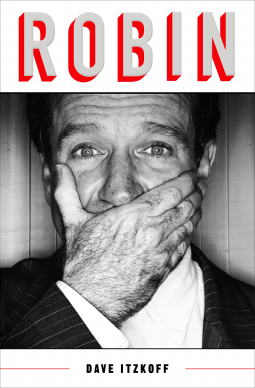 Robin is a biography about the late, great Robin Williams.  While I enjoyed Robin and his work, I didn’t really know too much about him otherwise.  The book begins with how he grew up and how he always found ways to make his Mom laugh.  Robin ended up lonely because his Mom would often travel with his father, leaving Robin alone.  He was always very modest and didn’t believe that he was worthy of the fame.

It talked about his early days in comedy and how he wouldn’t stay on the stage with the mic, he would sometimes go out in to the crowd and was able to project his voice enough to let the audience hear him and keep their attention.

There are chapters devoted to some of his more successful and major movie roles as well as details of some of the awards he won – and how in 2005 he won an award and essentially announced that he was drinking again.

At the end of the book is a selected variety of the movies and other works he performed in as well as some of the awards he won.  Simply an amazing mind gone far too soon.

I received a free e-copy of this book in order to write this review, I was not otherwise compensated. This book was released May 15, 2018 from Henry Holt & Company.

From New York Times culture reporter Dave Itzkoff, the definitive biography of Robin Williams – a compelling portrait of one of America’s most beloved and misunderstood entertainers.

From his rapid-fire stand-up comedy riffs to his breakout role in Mork & Mindy and his Academy Award-winning performance in Good Will Hunting, Robin Williams was a singularly innovative and beloved entertainer. He often came across as a man possessed, holding forth on culture and politics while mixing in personal revelations – all with mercurial, tongue-twisting intensity as he inhabited and shed one character after another with lightning speed.

But as Dave Itzkoff shows in this revelatory biography, Williams’s comic brilliance masked a deep well of conflicting emotions and self-doubt, which he drew upon in his comedy and in celebrated films like Dead Poets Society; Good Morning, Vietnam; The Fisher King; Aladdin; and Mrs. Doubtfire, where he showcased his limitless gift for improvisation to bring to life a wide range of characters. And in Good Will Hunting he gave an intense and controlled performance that revealed the true range of his talent.

Itzkoff also shows how Williams struggled mightily with addiction and depression – topics he discussed openly while performing and during interviews – and with a debilitating condition at the end of his life that affected him in ways his fans never knew. Drawing on more than a hundred original interviews with family, friends, and colleagues, as well as extensive archival research, Robin is a fresh and original look at a man whose work touched so many lives.