Monday October 15th Lance came to Sacred Heart University as part of their lecture series. While the lecture was geared towards the students there it was open to the public and we very well may have been some of the oldest fans that showed up… but ain’t nothin’ wrong with that! Lance ended up talking about various topics for almost an hour – his failed Russian space mission, growing up and not knowing he could be a musician, getting the call asking him to be in *NSYNC, the Brady Bunch house, being an actor, causes that he supports and that are near and dear to his heart, coming out as Gay and how growing up without any out role models affected him and how he wants to help be a role model for LBGT kids today…. The last 15 minutes or so were reserved for questions and I have to say that I’ve been to a few events like this and they were probably the best questions as a whole that I had ever heard asked. Definitely touched on some great subjects like what projects he has in the works (an *NSYNC broadway show? A documentary about Lou Pearlman? New *NSYNC merch coming out…) Afterwards we hung around and were able to catch Lance leaving and get pics with him and I chatted with his husband Michael a bit as well. 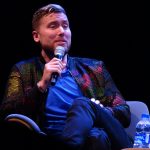 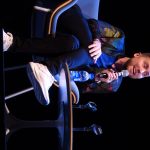