Elton John brought his Farewell Yellow Brick Road tour to the XL Center in Hartford on September 19th. We had bought tickets what seemed like so far in advance and then before we knew it, the day of the show was upon us! I had taken a peek at the setlist before the show and realized I was familiar with most of the set (and the ones that titles I didn’t recognize I was hoping I would recognize the songs once he had started to play them) but I was super disappointed to see that he had no Lion King songs included ☹ We got to the venue pretty early in an effort to beat traffic and ended up finding we had parked next to a broken escalator so we had to ride a scary elevator instead. While we were waiting for doors we saw the escalator had been fixed, but by the time the show was out the escalator was OFF. So we had to ride the creepy elevator yet again…
We had a couple in front of us who were VERY excited about the show, and turns out they also knew how to use setlist.fm and look up setlists so they discussed the show with us a bit beforehand and said they had seen him a few times before (it was the first (and last!) time for my Mom and I) and it would be the BEST SHOW WE HAD EVER SEEN. After the show my Mom and I agreed – it was a good show but probably not the BEST! EVER! Except neither of us really could decide which show that we had seen was the best.
When we got to our seats, Elton’s piano was furthest from us, but I noticed a track on the stage and figured the piano was going to move. Sure enough, it did, and he did end up over on our side of the stage a couple of times (though never for very long). His band was absolutely incredible backing him and in addition to playing the songs, he told stories about most of them before he started which I always find really interesting in getting the backstory about how songs were written, what they are about, etc.
The stage setup had a brick road all around it with different items of significance throughout Elton’s career included – the broadway shows, etc. I wish we could have gotten a better look at the other side of the stage as well because the detail was amazing! My only disappointment was I thought that he would change his outfit/glasses a bit more than he did – otherwise I have no complaints and it was a great show! 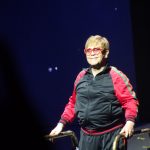 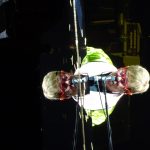 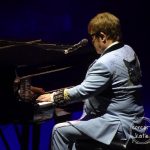 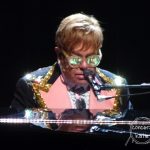