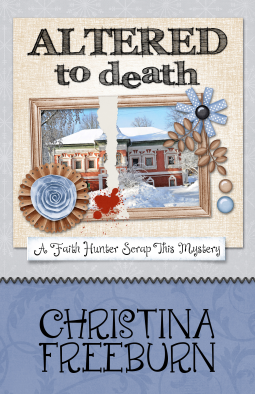 Altered to Death is another one of the Scrap This murder mysteries.  When I started this book back in December I realized that I had missed out on 2 of the books in the series and considered going back to read the other two before this one.  When I realized I was never going to find the time to catch up, I decided to skip them.  I don’t think that I missed out on any major details by skipping those 2 books in the series and maybe eventually I will be able to go back to them.  I think this is the first one that I read where the murder mystery didn’t revolve around the scrapbook store.

Faith was hired by the town to put together a historical scrapbook of its history and it uncovered a body and a mystery that of course gets Faith into all sorts of crazy predicaments and situations.  There is a diary and no one really knows what is going on with the heir and of course, small town, everyone is all up in everyone else’s business.  Faith tries to solve the mystery and get the information she needs from other people in town without revealing too much of what she has found, or thinks she has found.

This was another fun read like the others in this series that I have read and I love that there is such a niche genre of scrapbook murder mysteries out there for me to enjoy.

Even knee-deep in planning her wedding, Faith Hunter finds herself distracted by the town scrapbook she was commissioned to create. Eden’s oldest mystery, the founding family’s exodus nearly a hundred years ago, remains unsolved. When a search through the family’s abandoned mansion leads to the uncovering of bones on the property and ex-boyfriend Steve Davis announces a surprise heir has staked a claim, Faith is determined to dig up the truth left behind.

Meanwhile, family friend Wyatt Buford asks Faith to look into his deadbeat father’s disappearing act and his connection to the murder. Her quest for answers unearths secrets past and present that some would prefer stay buried at any cost. Faith’s resolve to present the facts and nothing but about Eden’s history could lead to her own future being cut short.

“Faith Hunter is a delightful amateur sleuth and the quirky characters that inhabit the town of Eden are the perfect complement to her overly inquisitive ways.” – Jenn McKinlay, New York Times Bestselling Author of Copy Cap Murder

Part of the Henery Press Mystery Series Collection, if you like one, you’ll probably like them all.

Author Bio: The Faith Hunter Scrap This Mystery series brings together Christina Freeburn’s love of mysteries, scrapbooking, and West Virginia. When not writing or reading, she can be found in her scrapbook room or at a crop. Alas, none of the real-life crops have had a sexy male prosecutor or a handsome police officer attending. Christina served in the JAG Corps of the US Army and has also worked as a paralegal, librarian, and church secretary. She lives in West Virginia with her husband, children, a dog, and a rarely seen cat except by those who are afraid or allergic to felines.