April 3, 2018 by ConcertKatie No Comments 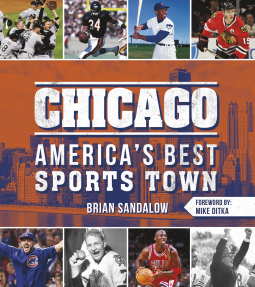 Chicago: America’s Best Sports Town is another in the series (I had previously read about Boston – I disagree w/ both but I may be biased as a NY Sports fan).  The forward of this book is written by none other than Mike Ditka.  The book focuses a chapter on each of the sports teams – Football’s Bears, Hockey’s Black hawk’s, Basketball’s Bulls, Baseball’s Cubs and White Sox.  There are also chapters on the colleges, the Olympics and then some other fun inclusions as well.  I really like when they include the “mount rush mores” in these books – what players from each team past and present would end up on the mount Rushmore if it was sports based and not presidential based.  And for those that didn’t quite make Rushmore status, there’s also “the best of the rest.”

While I may not agree that Chicago is America’s best sports town, (I’ll give them the Bulls though) the book had a lot of great information and was a fun & easy read.

Chicago’s five major professional sports teams have put their fans through hell, reached incredible heights, and been graced by some of sports’ greatest stars. And that’s only part of the story of Chicago sports. Divided during the summer and united for the rest of the year, the Chicago sports scene has a unique culture. The win-loss records can only say so much about the Bears, Blackhawks, Bulls, Cubs, and White Sox. Each team has a rich history filled with characters and settings a writer could only dream of creating. Perhaps more than any other city, Chicago is defined by what its teams do on the field, as some of the city’s athletes have become its greatest ambassadors. Chicago: America’s Best Sports Town tells of the stories of the athletes and beloved sports teams of this Midwestern metropolis. Yes, some losing is involved, but so is plenty of triumph and, most of all, passion.