Book Review: All I Ever Wanted 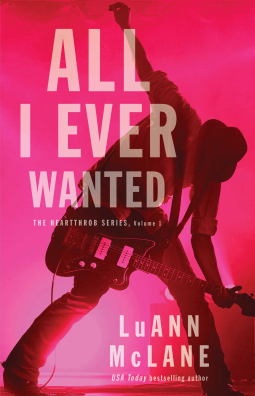 I needed a good book to read for my plane ride to Vegas to see the BSB residency so obviously I picked the one with the NSYNC lyric in the title – All I Ever Wanted – but was amused to find that most of the chapters were named after BSB songs and I was 85% done with the book before NSYNC popped up again! haha.  This book is about a boyband made up of brothers called Hearbeat.  They had broken up and were putting on a reunion show in their hometown.  This book focuses mostly on band member Grant and his ex girlfriend Arabella who was the band’s choreographer.  They used to date, but broke up when she thought he cheated on her.  The book follows the band through setting up for their reunion show, the brothers trying to set up a reunion for Arabella and Grant and everyone dealing with their issues based on the band’s parents no longer being with them.  The reunion show ends up a great success and while they said it was going to be a one-off… are there more shows in their future?  Arabella seems like she is all-in on being with Grant, but was selling her business a mistake?  I guess we will find out in the next 3 books… all with BSB titles.

I really enjoyed this book and a boyband romance was JUST what I needed for my long flights to Vegas and back!! (I’ve already been approved for one of the sequels and can’t wait to dive in!)

From USA TODAY bestselling author LuAnn McLane comes the first in a brand new series featuring the sexy Heart brothers: formerly the members of the cult-phenomenon boy band Heartbeat, they’re all grown up and back together for one last reunion tour….

When Grady Heart, former lead singer of the cult-phenomenon boy band Heartbeat and eldest of the brothers, decides to bring the group back together for a highly anticipated reunion concert, he doesn’t expect to be met with so much resistance from his brothers. He also doesn’t expect them to hire his ex-girlfriend and ex-Heartbeat choreographer Arabella York to help the band rock some new dance moves.

Back in Heartbeat’s glory days the brooding bad boy fell hard for Arabella; the studious, stable dance teacher tamed Grady’s wild side but her lack of trust in him eventually drove them apart. Although their chemistry burns hotter than ever, Grady tries to keep his relationship with Arabella strictly professional this time around but in his heart, he might just still long to find out what could have been.

Filled withs “McLane’s trademark devilish dialogue” (Publishers Weekly), All I Ever Wanted is a sexy rock ‘n’ roll romance, perfect for anyone who’s ever loved a boy band!