January 16, 2018 by ConcertKatie No Comments 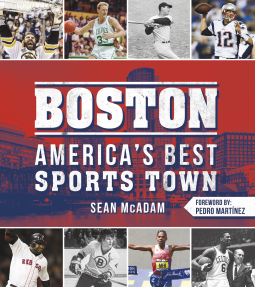 As a fan of mostly New York teams, I’m not totally sure I agree with the title of this book, but let’s just go along with it.  The forward is written by none other than Pedro Martinez, so you can’t be mad at that.  Each chapter focuses on a different Boston sports team.  Throughout there are also some Top 5 lists – best games in history, best trades, which players would be on a mount rushmore for that team and then “the best of the rest”.  And there’s even a chapter on Boston Olympians.  The final chapter is an overall Mount Rushmore of Boston.

A pretty neat sports book, even if I am not a fan of any of the teams featured in it.

Since 2002, Boston’s four major pro sports franchises have combined to win 10 championships, a distinction to which no other American city can lay claim over that span. But success is hardly new for these teams, each of which possesses a long, rich history. Beyond the storied franchises, each bearing decades of tradition, are truly iconic stars, unforgettable victories, and yes, at times, shattering defeats. These games have taken place in venerable ballparks and arenas, filled with passionate fans who carry the city’s unique sports history as part of their own DNA. This book recounts the stories behind the triumphs—and occasional setbacks—of the athletes, coaches and teams that have combined to make Boston: America’s Best Sports City.