January 6, 2018 by ConcertKatie No Comments 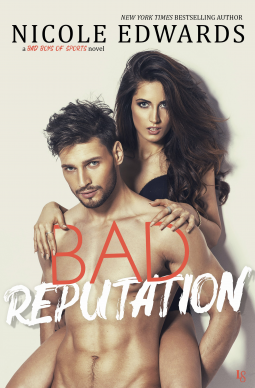 Bad Reputation is the story of Hockey Bad Boy Chase and his best friend Cassie. The two are best friends – only friends.  Although it seems like both might want more but are afraid to tell each other.  When Cassie gets a HUGE work opportunity to give a keynote address in Vegas, she is nervous but asks Chase to tag along.  Things get a little wild after a night out of drinking when Cassie tells Chase that they should get married.  Chase goes along with it but the next morning neither of them can remember anything of what happened.  The two end up sharing a kiss and for anyone who witnessed it, it was clearly more than a “just friends” kiss.  They end up drunk again and sleeping together all night long. (It took 50% of the book to get to this action – but totally WORTH THE WAIT) Of course, this is also the night before Cassie’s big keynote address and you guessed it – she slept through it.

Will Cassie lose her job? Who will remember that first night in Vegas first – and will they tell each other? Will they get the marriage absolved? Once they return from Vegas will they go back to being just friends and what happens in vegas stays in vegas? Well, you’ll just have to read it to find out.

Usually I read baseball, not hockey, but the dude on the cover was H-O-T – which usually means the book is going to be a flop but other than being somewhat predictable (the best friends end up together) it was really an enjoyable read.

Meet the most wanted players in sports . . . one ridiculously hot alpha male at a time.

Chase: With a nickname like “Sin,” it’s no wonder they call me the bad boy of hockey. Opponents curse me. Fans scream my name—in the arena and in other, much more private places. Penalties or not, I’m not afraid to dish out a little pain. But pleasure? That’s my weakness. And no one knows it better than my best friend, Cassie Desrosiers. I’d have to be blind not to notice her rocking body and teasing grin. So when she invites me along on a trip to Vegas, my curiosity isn’t the only thing that’s aroused.

Cassie: Chase Barrett is a world-class A-hole. As his best friend, I’m allowed to call him on his BS. Who else is going to do it? Certainly not the puck bunnies swooning at every flex of his biceps. Everyone knows that Chase is the love-’em-and-leave-’em type. There’s no such thing as commitment for the king of casual hookups. So why should I care? Maybe because all work and no play makes me a sexually frustrated girl. It’s time to put the hockey stud at my beck and call to good use . . . but after a week in Vegas with Chase, I might never want to go back to the real world.