December 19, 2017 by ConcertKatie No Comments 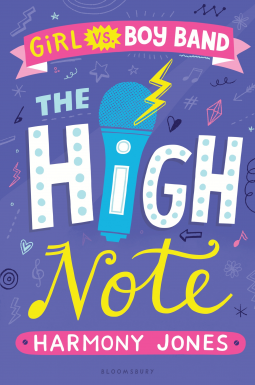 The High Note is the second book in the Girl vs Boyband series. I had previously read the first book.  Lark is hanging out with Abbey Road – British Boyband that recently had a member replaced by Lark’s crush from school.  Mimi is a budding singer and songwriter, but has stage fright so the only way her songs make it out to the world is when Lark and her friend Mimi make videos for the song under a moniker on YouTube.  Lark’s Mom gets mad when a record label shows interest in Lark, since her Mom runs a record label as well – which is the one Abbey Road is signed on to.  Abbey Road has taken off and they are being primed for fame and Lark may be finding some fame of her own as well.  Meanwhile, she has a crush on Teddy and Max says that Teddy has a crush on her as well… The book ended a bit abruptly after Lark’s first show – of course to set up the reader for the next book in the series!

I enjoy following the story of Lark (Girl) and Abbey Rd (Boyband) in this series. I am looking forward to more to see what happens now that Lark seems to be getting a career of her own!

Fans of Taylor Swift and One Direction will love the second book in this musical tween series featuring an aspiring singer-songwriter and the boy band who changes her life.

A few months after winning her school’s talent show with her original song Homesick, eighth-grader Lark’s star is on the rise. Not only did she impress her classmates, but now she’s making waves on YouTube, thanks to her friend Mimi uploading a video of Lark’s singing. A record executive is interested in signing Lark to his label, which infuriates Lark’s mom, who runs her own record label.

Meanwhile, Lark’s friends in the British boy band Abbey Road are still trying to make it big in the U. S. As they’re being primed for fame, Lark worries that she’s losing touch with her new friends . . . until they ask her to be an opening act. Can she find the courage to overcome her recurring stage fright in time to perform when it counts the most?

Harmony Jones is the author of Girl vs. Boy Band: The Right Track and many other novels for children and young adults. She splits her time between Connecticut and the Rhode Island coast, where she lives happily with her husband and their two incredibly spoiled golden retrievers. She is a lifelong fan of pop music, and even has a whole room in her house dedicated to her favorite group of all time – the Beatles!