December 5, 2017 by ConcertKatie No Comments 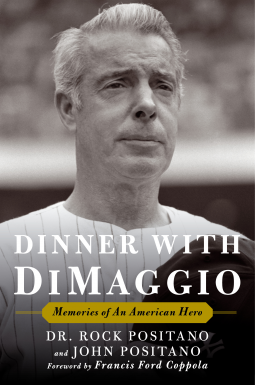 Dinner with DiMaggio includes candid stories from those who knew him.  The book revolves around his relationship with Dr. Rock Positano, a NYC foot specialist.  The book goes into some of Joe’s rituals and quirks.  I was surprised to find out that he grew up in New Haven!  He was a very private person and had a life in New York, California and Florida and those lives never intersected. Everyone from each piece of his life only had some pieces of the puzzle, but Rock seemed to know about all of the aspects of his life.  There are stories in the book about his relationship with Marilyn Monroe and other great stories from Rock who ended up becoming like an additional son to DiMaggio and spent a lot of time with him and has a lot of really great stories to tell. If you are a baseball fan you won’t want to miss the change to read this book.

The real Joe DiMaggio, remembered by the man who knew him best in the last decade of his life—candid and little-known stories about icons from Ted Williams, Lou Gehrig, and his Yankees teammates on the field to Marilyn Monroe, Frank Sinatra, and other great celebrities off the field.

Dinner with DiMaggio follows the story of their friendship from its star-struck beginning through all its highs and lows over the next decade. Forty years younger than DiMaggio, Dr. Positano became a surrogate son at a time when his actual son was suffering from substance-abuse problems. Positano’s accounts of their times together reveal DiMaggio’s many rituals and quirks: the same meals at the same restaurants, the same pals in New York and Florida, jacket and tie everywhere. At the pinnacle of his fame, DiMaggio had learned to be guarded and carefully managed his image and private life. As his trust in his young friend grew, DiMaggio opened up about Marilyn, but also about his first wife, Dorothy Arnold, the mother of his son and the real love of his life. The Yankee Clipper knew everyone, and Positano shares never-before-told stories of famous people DiMaggio admired and those he didn’t.

This is DiMaggio as he really was: sometimes cranky and calculating, but more often charming, generous, loyal, and always big-hearted when it came to kids. The stories and experiences he shared with Rock Positano comprise an intimate portrait of one of the great stars of baseball and one of the icons of the twentieth century.