Book Review: Talking As Fast As I Can 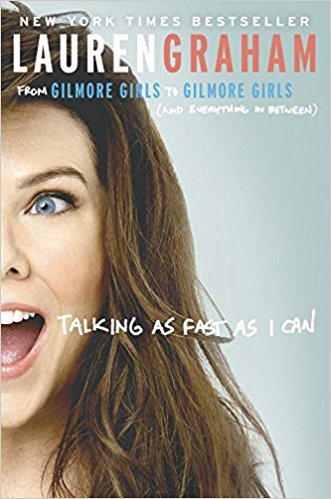 When your friend lets you borrow a book, it’s probably best you read it right away and then return it to them? Right?  Well my friend Maribeth let me borrow this book in January during our trip to Jamaica and I read it in an evening in July knowing she was coming to visit a couple of days later to return it.  I’m the worst.

The plus side is, this was a very quick read and very enjoyable as well. It is written by Lauren Graham, of Gilmore Girls fame and talks a bit about the behind the scenes of “A Day In The Life” that was released via Netflix last year as well as about herself and her career and how everything came in to place so that she could end up playing Lorelai Gilmore – who is known for talking fast. Actually everyone on that show seems to talk really fast – I’m sure if you’ve watched you’ve noticed.

I loved reading this book because I could read everything but hear Lauren saying it in my head.  She seems like a lot of fun and tells great stories! Definitely work checking out if you are a fan of her and/or Gilmore Girls!

About the Book
NEW YORK TIMES BESTSELLER • In this collection of personal essays, the beloved star of Gilmore Girls and Parenthood reveals stories about life, love, and working as a woman in Hollywood—along with behind-the-scenes dispatches from the set of the new Gilmore Girls, where she plays the fast-talking Lorelai Gilmore once again.

In Talking as Fast as I Can, Lauren Graham hits pause for a moment and looks back on her life, sharing laugh-out-loud stories about growing up, starting out as an actress, and, years later, sitting in her trailer on the Parenthood set and asking herself, “Did you, um, make it?” She opens up about the challenges of being single in Hollywood (“Strangers were worried about me; that’s how long I was single!”), the time she was asked to audition her butt for a role, and her experience being a judge on Project Runway (“It’s like I had a fashion-induced blackout”).

Some more things you will learn about Lauren: She once tried to go vegan just to bond with Ellen DeGeneres, she’s aware that meeting guys at awards shows has its pitfalls (“If you’re meeting someone for the first time after three hours of hair, makeup, and styling, you’ve already set the bar too high”), and she’s a card-carrying REI shopper (“My bungee cords now earn points!”).

Including photos and excerpts from the diary Graham kept during the filming of the recent Gilmore Girls: A Year in the Life, this book is like a cozy night in, catching up with your best friend, laughing and swapping stories, and—of course—talking as fast as you can.