Saturday we made the trek to Fenway Park to see NKOTB and The Total Package Tour.  This was my first concert at a ballpark! As soon as we had gotten let onto the field to take our seats, it started raining.  Fortunately I had some ponchos in my purse and we quickly put them on. The rain was on again off again.

Boyz II Men opened the show and it was slightly drizzling their whole set – which made trying to get any photos tricky! When they started playing Water Runs Dry it started raining harder! I thought that they had a great set and it was a lot different from their set on The Package Tour.

Paula Abdul was next up, and it started absolutely pouring so half her set I was hiding in my poncho to try and stay dry.  She talked about how singing in the rain inspired her when she was younger to become a singer and dancer… but it took her quite a while to realize… she was SINGING IN THE RAIN.  A few songs in she announced she had to leave the stage and then the PA announcer said severe weather was in the area and we had to take cover in the grandstands.

I have to say, the Fenway staff did an AMAZING job making sure all the wheelchairs were able to get out of the ADA area and to the ramp that was several sections away by holding back the rest of the concert go’ers and doing the same when we went back after we got the all clear.  If not, navigating through the crowd with the wheelchairs would have been impossible.

When we were let back to the seats, everything was being set up for NKOTB to take the stage.  It still was raining lightly, but by the time NKOTB came out the rain had stopped – but that didn’t stop the guys from stomping around in all the puddles that had formed on the stage!

I feel like for the past few NKOTB tours their setlists have been pretty much the same.  With the release of a new EP (which I still haven’t had the time to check out, bad fan!) and them being at it for so long (Jordan said they had been performing in Boston for 33 years!) they switched things up a bit and did a lot of throwbacks to the older stuff as they went through their discography and band timeline.

Highlights included the quick change camera which is hilarious and definitely live because Donnie had a piece of confetti stuck to his arm that appeared in the video just in case anyone thought it might have been pre-recorded and Joe’s son Griff joining him on stage to sing Please Don’t Go Girl. Adorable.

There also was a point in the show when the guys left the main stage and we had no idea where they were – and it seemed like the camera guys had no idea either as the screens on stage just kept panning around.  Turns out the guys were running around on the infield and then ended up on the dugouts for a song as well!

It was a great show and definitely a great first for me! It rained, it snowed, there was tons of confetti (though I only ended up catching a few pieces even though I was convinced we were going to be covered in it due to our wet ponchos) and even fireworks! 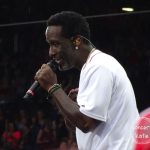 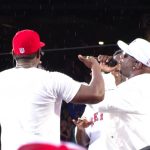 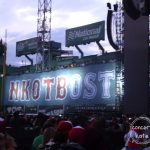 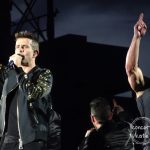 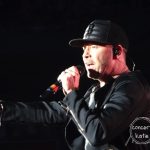 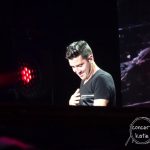 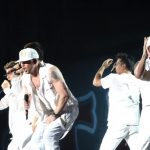 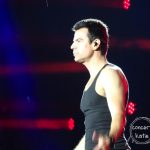 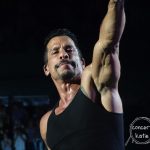 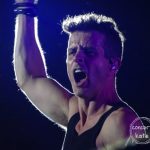 Stop It Girl
Popsicle
Be My Girl
I Wanna Be Loved by You
Didn’t I (Blow Your Mind This Time)
Call It What You Want
Valentine Girl
Happy Birthday
You Got the Flavor
Dirty Dawg
Never Let You Go
If You Go Away
Merry, Merry Christmas
This One’s for the Children
Hard (Not Lovin’ U)
Single
Please Don’t Go Girl

Step by Step
I’ll Be Loving You (Forever)
Hangin’ Tough