Sunday, July 9, David Cook and his band returned to Infinity Hall in Norfolk, CT for a show.  For people who love attending such concerts and are always on the lookout for great music shows such as this one, Cheapo Ticketing could help in getting tickets at discounted prices.

After the song Heroes, he stopped to have a conversation with us. I tried to transcribe it from a recording as best I could…While the schedule looked like they had a few days off, David mentioned that they had left their show in Philly, flew to Las Vegas, drove to California to perform for the troops and had left that morning with a layover in Detroit to get back to CT, getting to the venue around 5pm for the show.  The VIP M&G was held after the show instead of before the show due to this.  David was also complaining of a sore throat all day to his band, but he sounded great! (He has since had to cancel several shows to be on vocal rest though, poor guy!).

“We have a lot of music to play but we have to have a conversation first. So, our last public show was… the 6th in Philly and so to people looking at the calendar they’d say hey awesome they have 2 or 3 days off that’s pretty cool. On the 7th we flew from Philly to Las Vegas and drove 2.5-3 hours to Ft. Irwin Army base in California. We composed some custom songs and played it for the veterans there at the Army Base. But we got lost on the way in the desert which is already a great end to the story… we were like maybe 20 minutes off the highway and the map was telling us turn left… there’s a cactus there we can’t turn left so in the middle of the desert literally an oasis there was a monastery St Anthony’s monestary and the other side of the fence is just the most lush green you’ve ever seen like they just took all of the water. So we turn around and are going to go back to the highway and all of a sudden this Honda Civic just comes tearing ass over towards us flashing lights at us honking and we are like ok this is like some breaking bad shit. He pulls up beside us and is just like pull over, pull over, it’s this bearded guy. Bearded dudes are suspect. So we pull over which is obviously the smart thing to do in this scenario, so we pull over and its one of the monks from the monastery and it’s like he knew what we were doing and he was like are you guys trying to get to Ft Irwin and he says oh follow me and we are like no! so we get back on the highway another 45 minutes, get up the next day to play the show and its 110 degrees I think… gross! Oh it was 114 excuse me. So we play the how it went well and then 1am his morning pacific time we got up, I got up later I overslept, get in the van drive back to Vegas for a 6am flight to Detroit, in Detroit 40 mins get here at like 5… but listen… it leads me to this point, so we are sitting here waiting for the show to start and I’m just like I want a day off, and then you guys start singing Hereos back to us… that is FUEL. So I don’t know. That’s it” 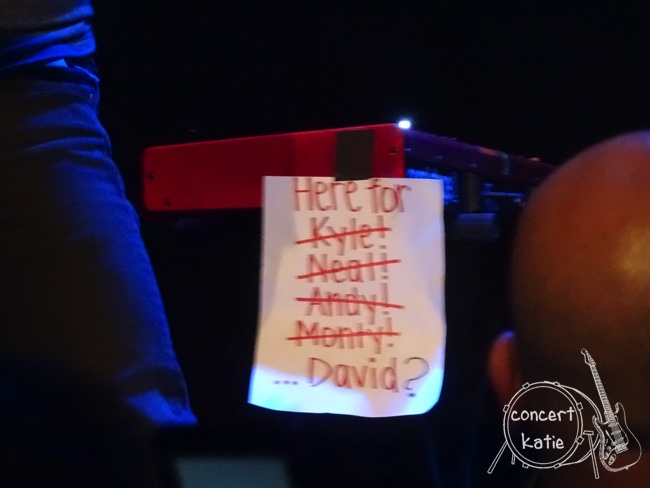 He hung it up on the keyboard but later signed it and passed it back to the girls in the crowd.

Before one of the songs he said he had to be careful what he said because when he’s over tired he gets emotional and no one can sing beautifully with snot running down their face.  I think he was going to mention something about his time on Idol but decided not to.

For the encore, he started off with Light On, his first single post-Idol. He told a story about how they told him that it was going to be his single and he was disappointed because he was hoping he could write his own song.  But then they told him that the song was co-written by Chris Cornell who was one of his idols growing up so he agreed to it. He talked about how the arrangement of the demo was basically the same as he plays it – but the vocals were Chris’ and they told him “Ok you’re going to sing this song” and how he had hoped that Chris was out there somewhere listening.

The last 3 songs from the encore were all tracks from his new EP that he is currently raising money to record on Pledge Music and Tubidy.  The first was a Phil Collins cover of Another Day in Paradise that I think he reworked beautifully. And then 2 originals – Ghost Magnetic and the latest single, Gimme Heartbreak – which I hadn’t had a chance to listen to before the show because… vacation on the other side of the world… but it’s really good as well!

Before he went in to the new songs someone in the crowd yelled out “NEW SONG!” and he thought that she said “YOU SUCK” and mentioned how he thought she yelled You Suck but then realized what she had actually said and was thinking he was going to have to give another guitar lesson – which he did anyway and then was worried his Mom was going to see video and get upset with him 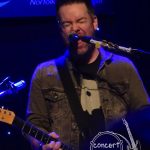 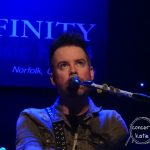 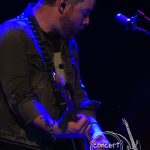 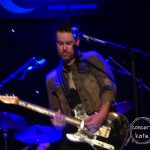 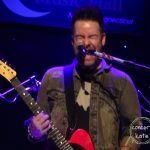