June 7, 2017 by ConcertKatie No Comments 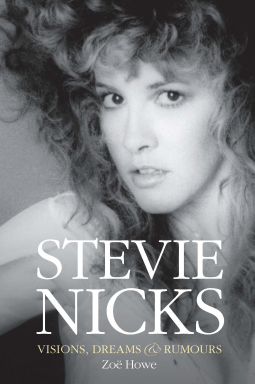 I went to see Stevie Nicks in concert a few years back and really enjoyed myself so when I saw that there was a biography of hers available for reading, I jumped at the chance to check it out.  The book is broken up into 4 parts and has 3 sections of pictures! (Always my favorite part.)  One really cool feature with this book is that it has a digital timeline of Stevie’s life included as a link. I had never seen something like this before, and it was very interactive and interesting to look through to see the various photos and videos that were included- the way of the future now that the ebook pulled the page right up on my computer to browse through.

Sometimes the chapter mentions what it was going to be about before it started and other times it sort of recapped what happened in the chapter – since I sometimes have a tendency to skim longer biographies at times, I liked this touch.  A lot of the information also came from interviews from other publications, which when I was reading some other reviews of the books people said they didn’t like that but I always like when actual quotes are included, in a biography it’s the closest you can really get to be being an autobiography when you have actual quotes from the artist the book is about.

I absolutely loved the pictures included – Stevie with a beehive as a teenager? Some great shots from shows too are included.

Fleetwood Mac’s Stevie Nicks is a musical visionary, a poet and an enduring style icon with a truly phenomenal life story. The Omnibus enhanced Stevie Nicks: Dreams, Visions & Rumours is a celebratory examination of this tale, tracing Stevie’s life from her Arizona childhood, the magic moment when she joined Fleetwood Mac and the hedonistic turbulence that followed.

Crowned ‘The Reigning Queen of Rock And Roll’ by Rolling Stone, and with gold and platinum solo albums to her credit, Stevie Nicks outlives her defining Fleetwood Mac image. Hers is a story of hard work, self-belief and a fierce devotion to musical creativity. Researched through exclusive interviews with many of Stevie’s close associates and collaborators, Stevie Nicks: Visions, Dreams & Rumours is a revealing and inspiring portrait of one of rock’s great women.