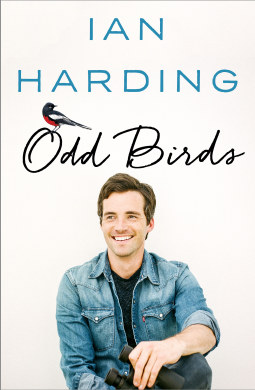 Odd Birds is by Ian Harding who you may know as Ezra from Pretty Little Liars.  What you may not know is that he is into bird watching.  Since his character on the show wrote a book, Ian decided that he should be able to write a book as well.  The book talks a lot about his adventures in bird watching and relates some of the lessons he has learned while doing it to his life as well.  He also talks about how he auditioned for Pretty Little Liars, call backs and how he feels now that it is ending after seven seasons.

I have no interest in birds at all, but that didn’t take away from the fact that I really enjoyed this book. Although I would have preferred it talked more about his acting career I think he found a really nice balance of funny anecdotal stories, bird stories and other stories about his life.

I received a free e-copy in order to write this review, I was not otherwise compensated.

A 7-time Teen Choice Award Winner on Freeform’s most-watched series, Pretty Little Liars … A social media influencer with over 7 million followers … An avid birdwatcher? Yes, you read that correctly. Ian Harding is all of these things, and so much more. In this memoir, explore the unexpected world of a young celebrity through the lens of his favorite pastime — birding.

Odd Birds is more than just a Hollywood memoir or tell-all. At its heart, this book is a coming-of-age story in which Ian wrestles with an ever evolving question— how can he still be himself, while also being a celebrity. Each humorous and heartfelt story features a particular bird—sometimes literal, at other times figurative. Using this framework, Ian explores a variety of topics, including growing up, life as a television actor and nature lover, and whether it is better to shave or wax one’s chest for an on-screen love scene.

A funny and heartwarming window into Ian’s life, Odd Birds is a must-read for fans of nature writing and memoir alike.