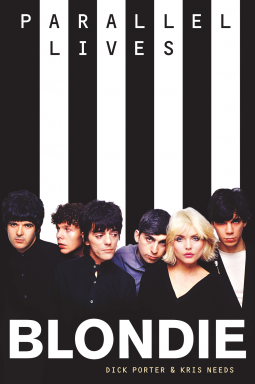 Blondie was like a reality show before there was reality TV.  In New York, in the punk era – they knew they had made it when they landed the cover of Rolling Stone in 1979.  Debbie’s entire life she had been trained to become a house wife and for marriage – but that’s not what she  wanted.  In a time when NYC was collapsing and life in New York resulted in seeing a lot of dead bums, Debbie and Chris had a spark and made Blondie a household name by 1980-1981.  This book was a really cool look back at a band that I wasn’t all that familar with – and as always – I loved all the pictures! There was lots of pictures.  I also loved reading about New York in the early 80s, even though it was nothing like it is today, it’s cool to see how far it has come.

One of the most iconic groups of their generation, Blondie experienced an unparalleled rise to global superstardom during the late 1970s. As they topped charts throughout the world, vocalist Deborah Harry adorned magazine covers and bedroom walls everywhere.

Drawing upon extensive first-hand interview material from Debbie Harry, Chris Stein and many other significant players in the band’s long history, Blondie: Parallel Lives is the definitive eye-witness account of the group’s long and often tumultuous existence.

Beginning with their childhoods, backgrounds and influences, the book charts the development of Blondie to their massive popular success and eventual break up; the 1997 reformation, subsequent renaissance with their No Exit album; the controversies surrounding the 2006 induction to the Rock n Roll Hall of Fame, ending in the present with the release of Panic of Girls.

Co-author Kris Needs established a friendship with Harry, Stein and the rest of the band that endures to this day. As a trusted confidante, he now recounts the full story.