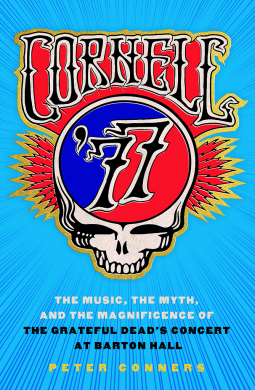 I am not much of a Grateful Dead fan but I was intrigued by the fact that one of their shows could be so amazing that it warranted having an entire book written about it.  This book goes into depth about the May 8, 1977 show performed by the Grateful Dead at Barton Hall at Cornell University.  Grateful Dead eventually was wore down by their fans to allow them to tape their shows.  Due to the circulation of the tape of this show, it made it to the top of everyone’s lists of greatest Dead shows ever.  This book breaks down everything you could want to know about how the tape trading works and how they made shows more popular. I was also proud to see that one of their New Haven shows was in the Top 10! Go Connecticut!  The book also has a breakdown of the setlist and what songs were performed, some photos and of course, fan interviews.  Definitely an interesting read if you are a music fan and probably even moreso if you are a “DeadHead”.

On May 8, 1977, at Barton Hall, on the Cornell University campus, in front of 8,500 eager fans, the Grateful Dead played a show so significant that the Library of Congress inducted it into the National Recording Registry. The band had just released Terrapin Station and was still finding its feet after an extended hiatus. In 1977, the Grateful Dead reached a musical peak, and their East Coast spring tour featured an exceptional string of performances, including the one at Cornell.

Many Deadheads claim that the quality of the live recording of the show made by Betty Cantor-Jackson (a member of the crew) elevated its importance. Once those recordings—referred to as “Betty Boards”—began to circulate among Deadheads, the reputation of the Cornell ’77 show grew exponentially. That aura grew with time and, in the community of Deadheads and audiophiles, the show at Barton Hall acquired legendary status.

Rooted in dozens of interviews—including a conversation with Betty Cantor-Jackson about her recording—and accompanied by a dazzling selection of never-before-seen concert photographs, Cornell ’77 is about far more than just a single Grateful Dead concert. It is a social and cultural history of one of America’s most enduring and iconic musical acts, their devoted fans, and a group of Cornell students whose passion for music drove them to bring the Dead to Barton Hall. Peter Conners has intimate knowledge of the fan culture surrounding the Dead, and his expertise brings the show to life. He leads readers through a song-by-song analysis of the performance, from “New Minglewood Blues” to “One More Saturday Night,” and conveys why, forty years later, Cornell ’77 is still considered a touchstone in the history of the band.