I knew that my 500th concert was going to be coming up, but with adding and removing shows from my list I wasn’t exactly sure what was going to shake out to be #500. Turned out with the addition of the “Freestyle 90s” show the night before, John Mayer got the honor of being #500.  For his “Search for Everything” tour he broke up the set into different chapters.  The show kicked off with him doing a full set, then an acoustic set of just him and DRH, the JM Trio made its triumphant return to the stage for Chapter 3, then back to to full band, the encore and the epilogue.  We had a chance to see the setlist that was “version 1” on the side of the stage – he only ended up changing one song. (And Why Georgia was spelled wrong on it, fyi.)

It had been quite some time since I had last seen John and I was really, really pumped for this show and he did not disappoint.  Some other reviews have said that his voice didn’t sound the same, and I didn’t notice it in the moment, but listening back to the show that was posted on archive.org, there is a bit of a difference and it did seem like it took him a few songs to get warmed up.  I did also see him spray his throat when he left the stage during the set changes in between the chapters.

I was hoping for more songs from the upcoming album release to be included in the set, but I guess he is holding them out for after the album was released – which I guess makes it a good thing that I am going to see him again in August.  He did play a few of my favorites – Gravity and Vultures and Johnny B. Goode was the tour debut of that song, Im always trying to keep track by looking at upcoming concerts near me.

The highlight was probably when he talked to his central nervous system.  As I had gotten no sleep the night before and wasn’t getting any sleep that night either I could totally relate. “Yeah, hi, central nervous system? I owe you… I owe you like a night of sleep. Listen, I’m not going to pay that tonight. What happens if I deal with that tomorrow? Oh, horrible day at work? Got it. Wish that I was dead for 12 hours? Good. Ok.  That’s fine. Please don’t call me… please don’t call me ever again”

He also thanked us all for being “Mayer defenders” at some point in our life and mentioned that he didn’t know that he loved anything to want to sit that far back from it when thanking everyone for buying tickets, even if they weren’t the best seats because they couldn’t have said no and that they’d catch him another time, but they didn’t. 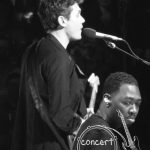 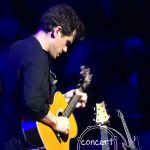 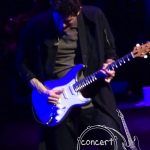 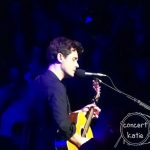