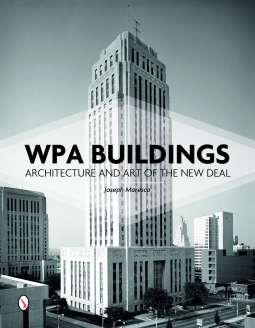 I love architecture and books that include lots and lots of pictures of really cool architecture are some of my favorites.  This book features WPA Buildings – buildings that were funded by the Works Progress Administration.  I’ve seen some buildings in this style before, so it was nice to learn some more about them and how they came about and some of the murals and details inside of them.

I received a free e-copy to review this book, I was not otherwise compensated.

In this fully illustrated, well-documented study, a historically underappreciated, uniquely American style gets its due. This survey explores the often-overlooked social impact of imposing government buildings in American cities, large and small, that were funded by the Works Progress Administration in the 1930s. It was The New Deal’s attempt to restore America’s self-confidence during the Great Depression. Art deco and modernism morphed into a style that broadcast the idea of the “new” and inspired civic confidence, as represented in structures such as the Federal Reserve in Washington, DC, and the Solomon Courthouse in Nashville. Eventually labeled WPA Moderne, this all-American streamlined classicism became the public face of an era defined by progress and a sense of security. An extensive chapter on the murals within these structures features elaborate, government-commissioned paintings depicting epochal events in US history and American citizens laboring tirelessly in hopes of a better, brighter future..