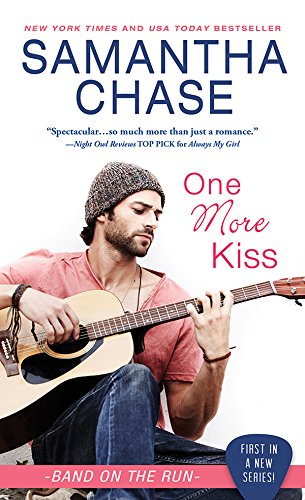 One More Kiss is the first book in a new “Band on the Run” series, so I am pretty excited after reading this first one that it will be continuing.  One More Kiss is about Matt (or “Matty”) Reed who was in a band and decided to take some time off from the band to do a Broadway show but when things didn’t go according to plan he ended up laying low in his home town while waiting for someone else to become the next scandal.  Matt moves in with his best friend Aaron and his sister Vivienne is moving in to the guest house.  The two once shared a kiss but both seem to be not wanting to bring it up and wondering if each other even remembers.  When Aaron has to head off to London, it leaves Matt and Vivienne alone together. Things start off friendly but end up turning into something more between them.  While the story did have some closure, it also left it open ended with a few storylines that need to be more explained as well opening it up for the rest of the books in the series.  I am not sure if they will continue to follow Matt and Vivienne in Matt’s next career move or if they may follow some of the other members in the band but I am looking forward to finding out and will for sure be keeping an eye out for when Book #2 is released.

I liked that this storyline seemed more realistic and was more focused on the off stage life than the on stage and on tour life (although I imagine this may come in to play in later books) and the relationship was able to happen more naturally than forced in a more fast paced tour setting.

I received a free e-copy in order to review this book. I was not otherwise compensated.

Matt Reed was living the dream until a bad career move sends him back to his hometown for much-needed privacy. Instead, he finds someone he never expected: the woman whose steamy kiss he remembers like it was yesterday.

Vivienne Forrester finally has her life in order… until Matt moves back to town. She doesn’t want to think about the time she threw caution to the wind with him, but running into him everywhere, it’s impossible not to…​